As in the previous year 1980, the MFC Lemgo again organized an aerobatic competition for large-scale model aircraft. The competition took place on the club’s own site, the Kleeberg, which is located in the scenic Lipperland and is almost the highest elevation there at about 36o meters.

After last year’s competition the event was rained off, because it rained and stormed so hard that only 2 passes could be flown under difficult conditions, this year the weather god was a little more merciful to us.

At the beginning of the competition a few raindrops fell, but after the somewhat extensive briefing, the flying could begin with relatively calm weather.

When already on Sunday noon the first three passes in each class had been completed smoothly, another pass was flown with the agreement of all pilots. Of these four runs only one was cancelled, so that not only the pilots had one more chance to improve, but also a massively underpinned overall result was created.

The program flown here in Lemgo is a so-called experimental program, which was created in cooperation with Günther Hoppe and some club members. Günther Hoppe has already gained considerable experience in this class through multiple participation in the Tournament of Champions in Las Vegas.

The A program contains 26 different figures (see figure description), which are to be followed in uninterrupted sequence. The program can be divided into main and secondary figures.

The main figures should be placed in the middle in front of the judges and also usually have a higher degree of difficulty, which is underlined by the factors 2 and 3. In contrast, the secondary figures form turning figures, which are usually easier to fly and do not have such a high scoring factor.

In the B program l0 figures to be selected by the pilot are flown. This B program is intended to create an easier entry into this class for all interested pilots.

It should also appeal to pilots who have a model that is more difficult to fly due to design or construction. To make it easier for pilots to select figures, the scoring factors for the B program were all set to 1, so that everyone could select figures. that correspond to their model and flying skills.

The most difficult figure of the entire program appeared to be the “cunning roll 45 degrees down”. The “smaller” models (approx. 2 to 2.1 m wingspan) tore. off cleanly, but were more difficult to catch, so that they usually over-rotated up to a 1/2 roll.

With the large model scale (about 2.4 m span), the stalling was not so nice, but are on the other hand much better to intercept.

Some pilots tried to get around the problem somewhat by slowing the model down at the beginning of the figure by pulling hard and then practically doing a spin, which is then fully controllable. Many pilots also still find it difficult to fly the figures in uninterrupted sequence. They still make too long straight flights between the figures, so that the turn figures are already placed relatively far away and can no longer be observed precisely enough by the pilot and also the judges.

The program was judged by 5 experienced judges, most of whom had already gained experience in this program last year. Of the 5 scores for each figure, the highest and lowest scores were eliminated. The remaining 3 scores were multiplied by the appropriate scoring factor and added up…. The result was then divided by 3.

This method of scoring ensures an optimal result and compensates for any incorrect scores that may occur.

Each of the 5 judges was assigned an assessor for this flight program, who primarily had to note the scores and also announce the figures to the judge. This assessor is necessary because the figures follow each other so quickly due to the program that the judge must always observe the model and therefore has no time to write.

This scoring method had already proven to be good last year and could also be confirmed this year for future competitions.

The models flown at this competition are in all cases replicas of original aerobatic machines. Some replicas of the aerobatic machines could already be classified as semi-scale models and possibly the “Pitts Spezial S 1 – S” as scale models. With the drives to these models the industry offers apparently still no standard variant, which are to be controlled problem-free, like the 10 and/or 15 cm3 engines available today. 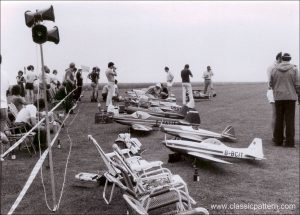 In the “small” models (approx. 2 m wingspan) the problem-free 15 cm3 engines were flown predominantly. In the larger models, gear motors with 2×10 cm3 engines and gasoline engines were used. The geared motors have high power and sometimes show almost excess power. Their main disadvantage is that the motors used in these gearboxes turn up to 1400 rpm and thus the gears start to whistle and make a noise that does not fit the flight pattern. 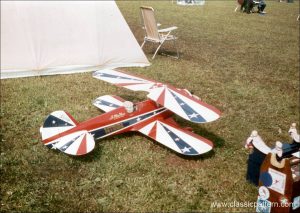 The standard version. Their noise level is more pleasant ane gasoline engines, on the other hand, are still quite weak in thd is also kept within limits in terms of volume when effective mufflers are used.

The best combination solutions of engine and model were seen at D. Altenkirch and G. Reinsch. D. Altenkirch used a Quadra motor with a resonance tube he developed himself.

This drive pulled the relatively light model powerfully and smoothly through the figures. G. Reinsch used a Quadra with original resonance tube. (Available through Praktical-Scale) 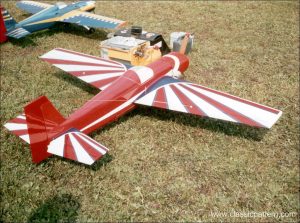 This drive unit was also well matched to the model and pulled it powerfully through the figures.

The organization and the course of the competition, not to forget the good catering, was extraordinarily well received by the pilots and guests. The free beer, which was served at the barbecue on Saturday evening, was received with enthusiasm and was soon empty.

It was clear from the interest and questions of the spec.tators that most of them were experts. The fascination went so far that some spectators inquired about the manufacturers of the models and already wanted to register for next year’s competition

The winner of this year’s competition was – as last year – Günter Hoppe. The 2nd and 3rd places were occupied by D. Altenkirch and K. Dettmer. In the class B. won G. Reinsch followed by B. Seyer and U. Richter.

A challenge cup and trophies for the three best of each class were flown. All other participants received a glass with the inscription of the MFC-Lemgo as recognition.

The cups were donated by the organizer of the Tournament of Champions, the owner of the Circus Circus Hotels in Las Vegas. Unfortunately, these trophies, which were already in Frankfurt, could not be brought to the award ceremony on Sunday.

Already since the first thought to organize such a competition, there was the problem to find the right or apt name for this event. Due to the fact that now at short notice an indication for the signing of the cups from Las Vegas should be reported, and also a relationship between the event there and the one in Lemgo should exist, it was decided for “Kleeberg Trophy”.

For the next years a further flying out of this “Kleeberg Trophy” (the challenge cup) is planned, which will be surely interesting for pilots and spectators.

Text and photos by Klaus Dettmer

Many thanks to Klaus’ sister Elke Dettmer who provided us with Klaus’ photo estate.