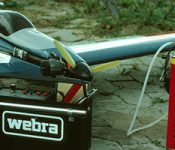 WEBRA – an epoch in model engine construction!
Review of a historical development of WEBRA model engines in Germany and Austria. We thank Mr. Gerhard Kaineder for documenting the history of Webra. The retirement si him …

Infos about the famous airplanes of that time, which were built and flown a lot, or which have been particularly successful. Reviews of earlier pictures and lots of information.

The World Championship airplane and Super Tigre’s X-60 R/C combine with Ace’s new Silver Seven to create all the “pattern potential” anyone could want.
Not so long ago, in a country far away known as South …

The Arrow is coming

The Arrow of Wolfgang and Guenther Matt, winner model of Aerobatic World Championship 1979.