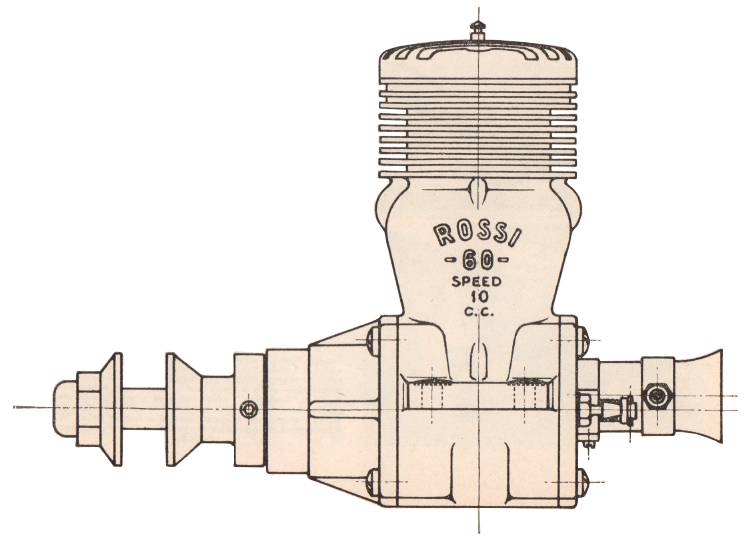 First Impression of the new Rossi 60 10 c.c. speed unit is of a really powerful and tough engine. Although resemblance to the McCoy 60 is striking, the Rossi has the appearance, and is certainly a much more robust engine than its counterpart.

Some of the items which are usually modified, in the McCoy 60 by specialists are already incorporated in the Rossi as standard production items. Workmanship is of high quality throughout and it would be difficult not to be impressed with this latest 10 c.c. design on the model engine market.

The sand cast case, stiffening webs included, is very rugged and consequently should be adaptable to very heavy duty work normally associated with boat and race-car operation. Most striking area is in the transfer port side, this being quite large and adequate. Only minor grinding to remove “flash” from the inside transfer area was apparently needed in the casting and no apparent effort was made to polish the transfer area. Another notable item is the inside of the lower case. The front half, receiving the front cover is about 1/16 of an inch heavier than the rear section that accepts the rotor, and is a result of a determined effort to “pack” the crankcase volume. 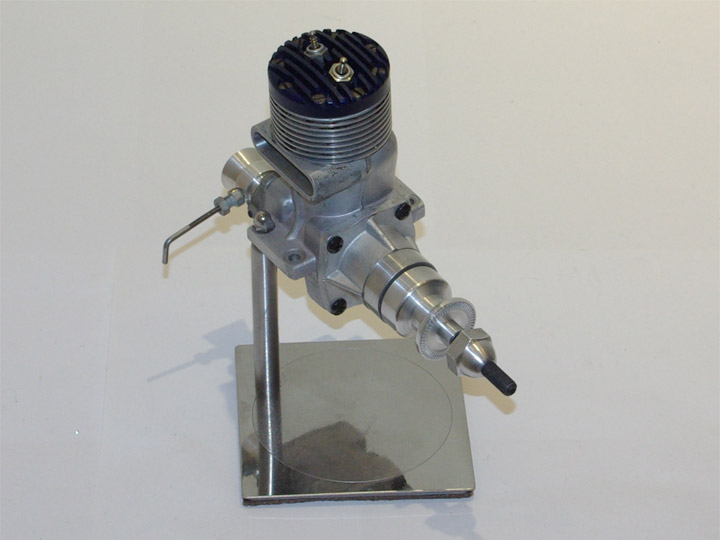 The crankshaft itself has been designed utilising the full disc counter weight principle to further aid in packing the crankcase and is moderately counter-balanced, with a bronze ring sealing off the cutaway area on the balanced shaft, similar to the new K & B Torpedo series engines as designed by Wisniewski. The crankshaft is of short design and very finely machined and polished, with a front extension and propeller driver held in place with an Allen head grub screw. This extension receives a I in. bolt approximately 11 in. long on which is mounted the propeller nut. The entire set-up certainly minimises extensive engine and crank-shaft damage in the event of a “prang”, needing only to replace a short 11 in. bolt, or at most, a new turned front adaptor. The entire front assembly is mounted to the case using 1 in. bolts rather than the 3/8 in bolts used in the rest of the engine. 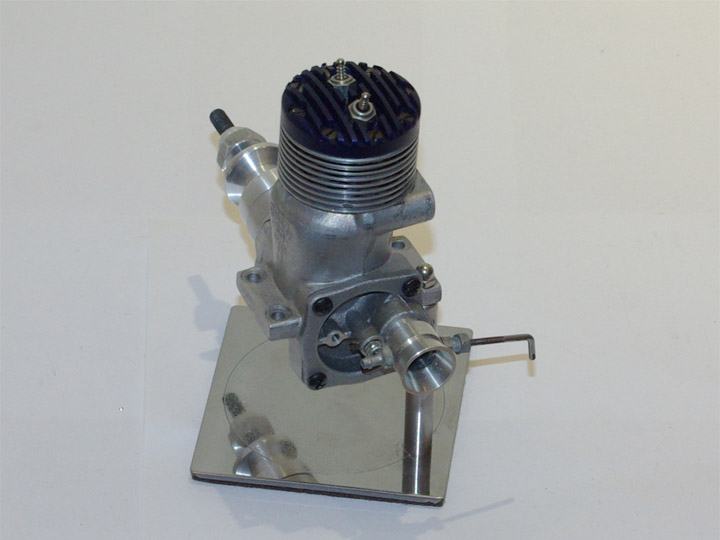 lt was not deemed necessary to further dismantle the front assembly and therefore the type and size of the two front ball bearings remain unknown, they are nice and free running. The “back door” is one of the finest stock rear cover assemblies seen on any production engine. The casting is quite rugged and clean, with the large, black anodized venturi being held to the rear casting by a small set screw. The fuel jet, which extends into the venturi throat about ¼ in., lines up perfectly with a needle valve having a long taper, and needle valve tension is set with the normal lock nut assembly. Rotor is made of a transluscent nylon material and has been “relieved” on the outside edge about 1/32 in. and lightened and balanced with a milled slot on the rear face. The rotor pin extends through the casting and is fitted with a coiled spring of mild tension, held in place by a small brass washer and cotter key. A pressure tap and fitting is provided on the left side of the backplate at the nine o’clock position for those desiring to use a pressure tank in lieu of a balloon tank. 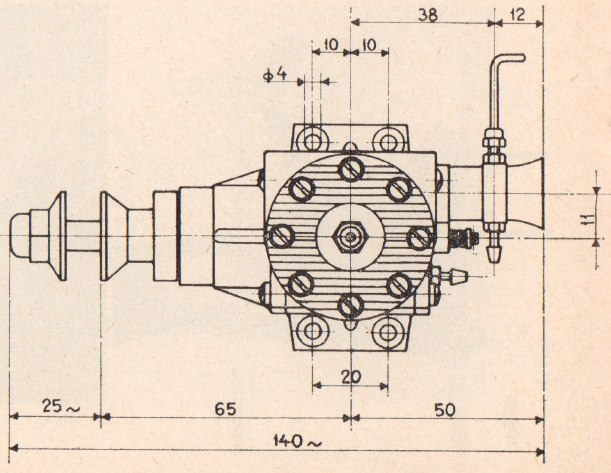 The Rossi cylinder head, which is also anodised in black, has a centre mounted glow plug extending into a conical shaped head with smooth transition from glow plug to firing chamber. The head is fastend in place by eight, 3/8. in. machine screws and although the front and back plate are fitted with gaskets, the head is a metal to metal gas tight seal onto the sleeve. A slot is milled across the domed head to accept the straight, bar type piston balle, and this piston is heavy, apparently designed for extraordinary heavy duty. It is equipped with a single ring, the ends of which are not butt jointed, but rather are cut on a 30 degree bias and in effect create a rather better seal, particularly in view of the single ring which is “pinned” in place to prevent rotation during running. The wrist pin is quite a bit shorter than the piston diameter and is held in position with small spring coil clips on either end and rides on exceptionally heavy bearers milled inside the piston. It rides on at least a quarter inch of aluminum on each end and no effort has been made to grind away excess weight inside the piston. Two bypass ports align with those cut in the sleeve. It is interesting to note that by “eyeball measurement”, the sleeves of the Rossi and McCoy are identical.

Summing up, the Rossi 60 speed 10 c.c. racing engine is a fine engine, whether to be used in aero planes, boats or race cars. lt lends itself easily to moderate hop-up procedures and it is my belief that most speed merchants, with a little “enginuity”, thought, and applied personal attention, could really enjoy themselves in modifications to this engine, particularly if a couple of extra pistons could be obtained. In my opinion, lightening the piston is a must; but I feel that you would have to look long and hard to improve the remainder of the engine other than applying the “personal touch” with polish. 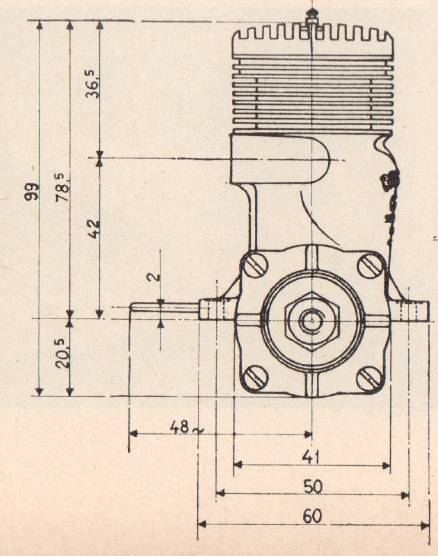 During the dismantling of the Rossi 60 it was readily apparent that the engine had been operated for consider-able time but in order to be certain that various parts were properly seated the engine was further run-in using a fuel mixture consisting of 20 per cent. Castrol M, 10 per cent. Nitro Benzene, 15 per cent. Nitro Methane and 55 per cent. Methanol (Regent Grade) for 15 runs of two minutes duration, totalling 30 minutes. At the end of this period the engine crankcase was still quite warm so it was deemed necessary to operate the engine for an additional 45 min. using the same procedure and fuel as listed above. Although the manufacturer recommends 20 per cent. oil, 50 per cent. Nitro, 10 per cent. Nitro Benzene and 20 per cent. Methanol this engine would not operate on this percentage nitro at this time, but did seem to run quite well on the lower nitro mixes. Thus, the following data was recorded using only two mixes of 25 and 30 per cent. Nitro. When an attempt was made to run comparative tests on 40 per cent. Nitro the Rossi definitely sagged and although the engine felt good it was noted that the single pinned ring had become “unstuck” and was rotating in the ring groove. In view of this and the fact that increased Nitro content would not result in an increase in performance at this time, it was decided to terminate the tests.