The premier money event in all of aeromodelling is back with a style and flair that marks the way things are done in Las Vegas. Thousands of spectators got a chance to see the world`s best at flying Radio Control Aerobatics go head for the $118,000 in prize money. 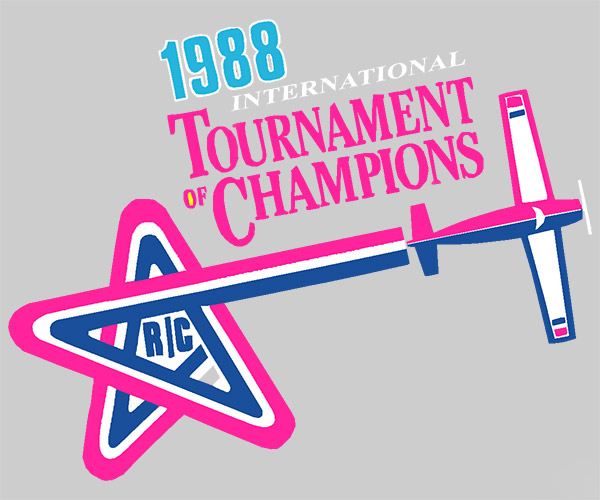 A more illustrious group of fliers than the 1988 Tournament of Champions competitors would be difficult to find. Collectively, they hold a total of no less than 66 current and past championships, both national and world. What sets the table, then, is a truly grand spectacle in the traditional Circus Circus manner. 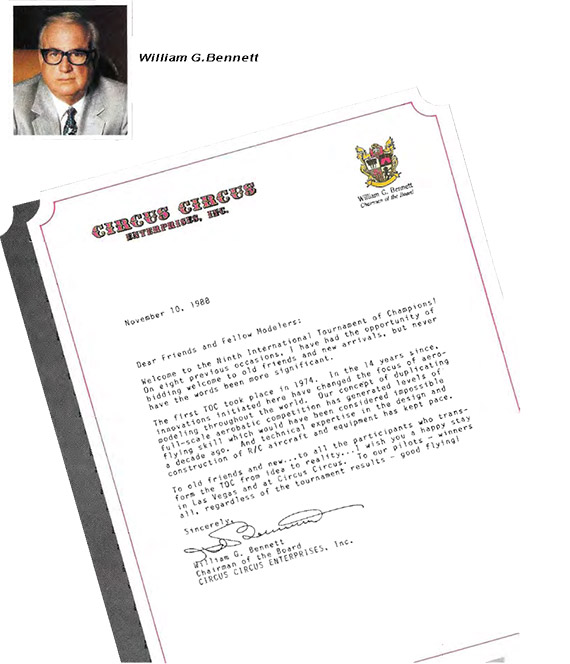 As head of the largest corporation in Nevada, Circus Circus Enterprises Chairman William G. Bennett has steadfastly pursued excellence in aeromodelling since 1974. That same year, longtime Model Airplane News Editor Walt Schroeder originated the idea of a meet of Scale aerobatic models to become the architect of the now-traditional Tournament of Champions.

Schroeder’s concept was that of a gathering of top-caliber pilots from all over the world, flying Scale replicas of full-size aerobatic air-planes and simulating the maneuvers per-formed by the manned craft.

You like the old stuff? Here you can get our TOC reprint stickers!

The idea proved both exciting and, ultimately, practical. The models seen at to-day’s Tournament of Champion meets are capable of performing virtually any maneuver listed in the Aresti book, with a few extras thrown in that, whether in full-size flight or models, couldn’t have been done 10 years ago.

Schroeder and Bill Bennett both made the rounds this year, greeting old friends and witnessing the remarkable progress that the sport/hobby has achieved. The site for this year’s TOC was first-rate with a smooth macadam runway 100 by 600 huge pits, safety fencing, and generous grass borders.

It was all flanked by soothing mountain views from a level plain roughly 15 miles to the north and west of downtown Las Vegas with its compelling Strip attractions. The horizon was clear of buildings or other distracting obstacles, and there was no sun glare to interfere with flying and judging.

Directly behind the enclosed field was the mammoth Circus Circus hospitality tent featuring hot and cold food and beverages, a souvenir shop, and room for hundreds to sit and chat. There were perhaps 20 acres of parking, not to mention clean chemmies!

The city of North Las Vegas deserves our thanks for building the complex, as does the Las Vegas Radio Control Club, who use it and maintain it—and the Nevada Air National Guard, who were on hand to solve any traffic hang-ups.

Creature comfort has always been a big deal in Las Vegas, so this major event had its A-pluses in place well ahead of time.

Contest Director Phil Kraft and his blue ribbon corps of scorers, judges, and technical designates oversaw four days of marathon competition among the 20 invited participants. These included the current RC World Champion and the current champions from the U.S.A. and other nations, the five finalists from the last TOC (1984), and others of certified promise.

Flying tasks consisted of “known” compulsory and “un-known” compulsory, plus freestyle and three-minute “anything goes” programs. In the latter segments individual Fliers presented maneuvers of their own choice, much the way Olympic figure skaters and gymnasts do.The judges scored according to criteria identical to those applied in full-scale aerobatics competition. Scores were added cumulatively from the three-day preliminaries, with the top five pilots advancing to the finals on Sunday for the big bucks. K-factors carne into play, as did criteria for versatility, continuity, rhythm, execution, and harmony. After the known compulsory programs, an unknown program from the Aresti bible was dealt to each flier. Since no practice was allowed for the unknown assignment. the watchword for the week became “beware the odd wobbleThe so-called free programs were designed to allow the fliers to be as maverick as they dared, but the pilots weren’t ranked for score until everyone had completed his segment. We saw several perfect 10s!The feats accomplished were mind-boggling. The level of skill was such that only the very practiced eye could discern the subtle nuances of difference between flier A’s and flier B’s maneuvers

From the numbers posted right up to the finals round, the matte developed in the scoring reflected these esoteric distinctions and was difficult to interpret.
To everyone’s credit, the entire week proceeded smoothly. No drips, no runs, no errors, no smushes.

The airplanes in previous Tournament of Champions were primarily variants of the popular Dalotels, CAPs, Chipmunks, and Lasers.

The 1988 rules allowed a 6% scoring bonus overall for biplanes, which yielded a crop favoring that configuration. Principal among them was the Ultimate, a replica designed and produced by Bob Godfrey of the full-size Canadian ship by Gordon Price of Guelph, Ontario.

Four of the five finalists flew an Ultimate from Godfrey’s workbench. At the moment, the design is supplied uncovered (approximately $1,200); it probably will be kitted later this year at about $575.

As the pictures and results indicate, this mini-airplane is a genuine winner. Very impressive! TOC airplanes require a maximum engine displacement of 4 cu. in., maximum weight of 22 lb., and minimum wing area of 1,100 sq. in. for monoplanes, 1,500 for bi-planes.

Deviations from scale of 10% were allowed, as were airfoil options and slight control surface changes. Contours and colors were to scale specifications. Most competitors took full advantage of the rules above, and an interesting assortment of big bangers adorned the pits.

The mix of Futaba and JR radio sets was about even (10 to 9), while Bertram Lossen fielded a Graupner 1 7R. Additionally, it was common for nine servos to be used for precise control.

AMA President Don Lowe presented a special plaque to W.G. “Bill” Bennett at the 1988 Tournament of Champions banquet held is Las Vegas. The plaque Is in appreclation of Bill and Circus Circus Hotel Casino for services to mode) aviation by sponsor-ship of the TOC international competitions.

As further incentive to present good-looking models, a Best Appearing Airplane award of $3,500 was on the prize list. That check went to John Britt for his Scully/ Britt/Ross Steen Skybolt.

While the voting was highly subjective, no doubt it was also very dose, since every plane in sight was of extremely high quality. One model that should be noted was the Russian Su-26M by Jeff Tracy of Australia, a very smooth-flying aircraft that drew much approval from spectators.

Tracy, an eight-time TOC invitee, surely thought long and hard before he waived his 6% bonus in favor of the monowing Su, but he did very well in the competition nonetheless. (The author had the privilege of inspecting the full-size Su-26M at the recent International Air Expo in San Diego. It is a work of an!)

Another set of jewels in the TOC crown were the Z-250 monoplanes of alternate Flier Peter Wessels—a barrister, no less, from Germany, and a very engaging fellow. The two craft were practically identical, had eye-catching colors, and showed high-quality workmanship. Peter told us that a kit may be available later this year—but unfortunately we don’t have his address. The slides should tell the rest of the story, as the man says.

Just as dazzling as the appearance of the aircraft assembled on the field was the flying itself. All the maneuvers from the Aresti book and the families of figures therein were to be flown continuously, with no pauses for setup between ending one maneuver and beginning the next.

Although each pilot was allowed one upwind pass alter takeoff for first entry, this format of unbroken transitions through a string of maneuvers placed a heavy premium on smoothness, elsewhere described as “harmony and rhythm.”

Each presentation was done solo, allowing the judges to give it full attention. After each flight, the next contestant, when announced, had three minutes to prepare, start, and take off. Those two features alone must have created enormous pressure for the fliers, to say nothing of the exercises themselves.

Most of the flights were very much on track, displaying spectacular knife-edges, verticals, slow passes with majestic snaps and rolls, and tremendously skillful outside 360s with snaps thrown in.

The weather was generally excellent, al-though high-gusting winds, preceding an invading cold front on Sunday, caused some drifting in vertical maneuvers during the finals and delayed stall entry with reference to position parameters somewhat.

With bags of power on board, however, most fliers easily overcame the adversity. Landings were a bit dicey, though—and cross-wind! Of the group, Hanno Prettner and Chip Hyde seemed least affected.

The first day of competition saw Chip Hyde, Dean Koger, Wolfgang Matt, Hanno Prettner, and Steve Rojecki walk away with the top honors. Closely following were six or so high-par types, among them Tony Frackowiak, who displaced Koger to make the finals.

Often seen practice flying a small, solid model, Frackowiak was clearly determined to break the inner circle, and did so. Chip Hyde also practiced a lot with what appeared to be a balsawood store-bought Hand-Launched Glider.

Dean Koger drew a lot of cheers with his straight-line and vertical multiple snaps. Chip Hyde executed some torque/antitorque vertical rolls, closely matched by Frackowiak’s daring knife-edge stunts. No mistake, these guys were going all-out in an effort to excel.

Oddly enough, Hanno Prettner, the eventual TOC champion, flew a pretty much stock EZ Laser in the free program rather than his customary Steen Skybolt. Rumor was that he had a tenth servo on board the Laser that pulled a piece of ballast back and forth, permitting some virtuoso maneuvers —truly awesome consecutive flat spins, a fuselage “wiggler” in flat and rolled mode, and another figure that much resembled a falling maple seedpod.

For the thousands of spectators, many of whom were watching their very first aeromodeling event, the Ferrari-like growl of Prettner’s twin-geared SuperTigre engines and his fine hand on the throttle were added fillips. (Circus Circus thoughtfully provided hourly bus shuttles between casino and field. Hundreds took the trip).

The finals were anything but ho-hum. The winds were gusting strongly, and the ground turbulence was difficult to handle. One high and one low round were to be thrown out, so everyone had pretty much an even crack at the big pot that waited. Steve Rojecki was the only near-casualty, shortening a prop on takeoff but landing safely.

About 2 p.m. the howling winds peaked, and lenticular clouds appeared overhead. The consensus favored caution, and it was decided to eliminate the last of the three-minute free programs. Since the outcome was already evident by that time, the High Fivers lined up for speeches, trophies, and sizable checks drawn on the Circus Circus account.

Hanno Prettner, the indomitable Austrian wizard of Aerobatics, claimed his eighth TOC victory (out of nine in which he’s competed). He received the $25,000 Circus Circus prize, plus $15,000 from JR Radios as a bonus.

You like to fly Classic Pattern planes? Here you can get our Manitu / Springfield editon!

Additional awards from the Circus Circus coffers went to 22nd place, where the alternates stood. There was a total of $118,000 in prize money and a minimum of $2,750 for every flier involved.

The organizers and staff deserve many thanks, and many cheers. In a city known for its big winners-and its equally big losers-the TOC broke the mold: Everyone went home with a bundle! 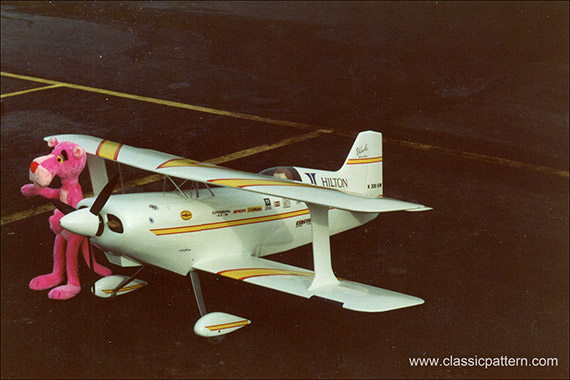 The future of the International Tournament of Champions is assured. During the awards presentation Circus Circus Marketing Director Mel Larson announced that there would indeed be a 10th TOC in 1990, staged on the same venue. First to be invited will be the 1988 top five trophy winners. Be assured that the remaining 15 qualifiers will be top-notch; the matchless TOC format guarantees it! Adding even more enjoyment will be the 4,000-room Excalibur Resort/ Casino being developed by Circus Circus and expected to be ready in time for the 10th annual championships. 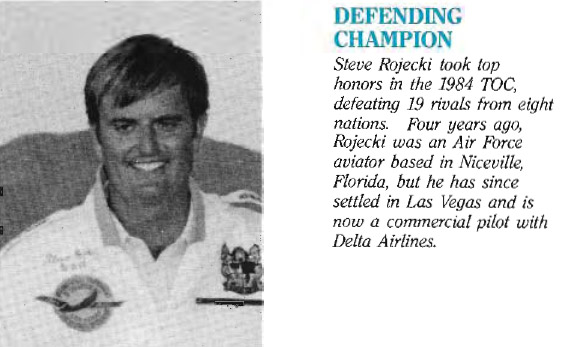 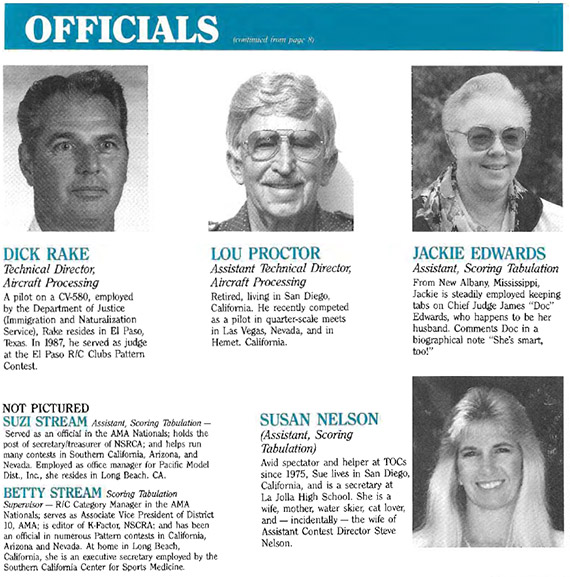 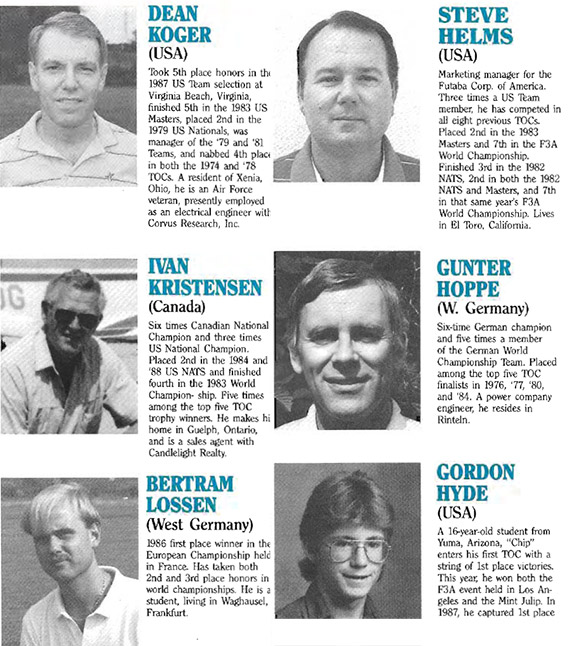 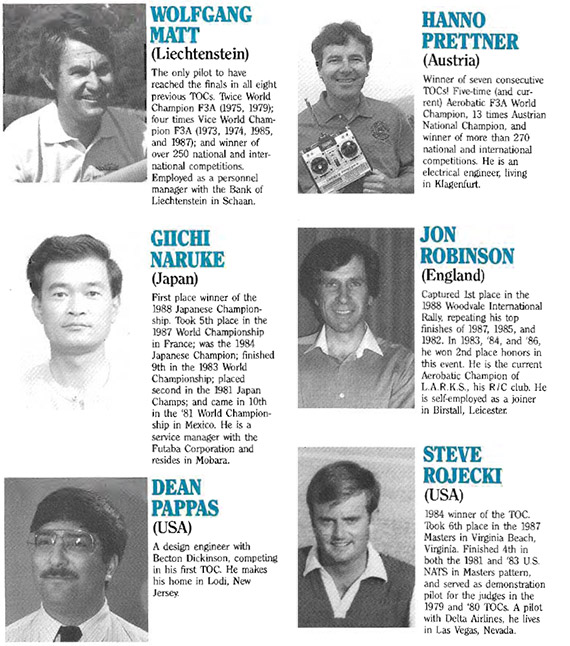 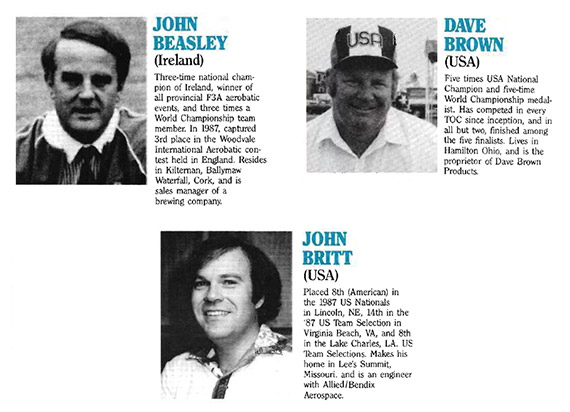