Third World Radio Control Championships  To Genk, Belgium, on August 21st, came thirty-nine competitors and a great many more “followers” for the Third World Radio Control Champion-ships. The aeromodelling centre at Genk consists of four control line circles and a radio control landing area beside a lightplane landing strip, visited by small aircraft throughout the championships.

Practice day did not reveal very much except that if the weather prevailed, the championship would be held in typical British competition weather. The universal interest in the U.S.A. team led to their half hour practice time receiving dose scrutiny, and with justifiable reason. Both Ralph Brooke and Jerry Nelson were flying with prototype Orbit Proportional radio equipment and naturally all wanted to see just what improvement this made to flying. Ed. Kazmirski also had the Proportional radio in a model but elected to fly his reed system equipped Taurus instead. 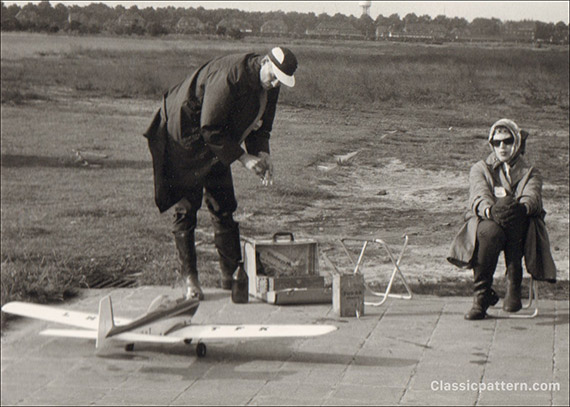 Tonneson from Norway and his “Hugin”

Competitors came from Austria, Belgium, Canada, Denmark, Finland, France, Germany, Great Britain, Holland, Italy, Norway, Sweden, South Africa, Switzerland, and U.S.A. Nearly half the entry, seventeen in fact, were using the Taurus design and in fact the Belgian, Canadian, Dutch and Danish teams were exclusively Taurus equipped, though, it must be pointed out, Mortensen was the only Dane present. Numerically at least therefore, it was something of a Taurus benefit contest, they were simply everywhere. 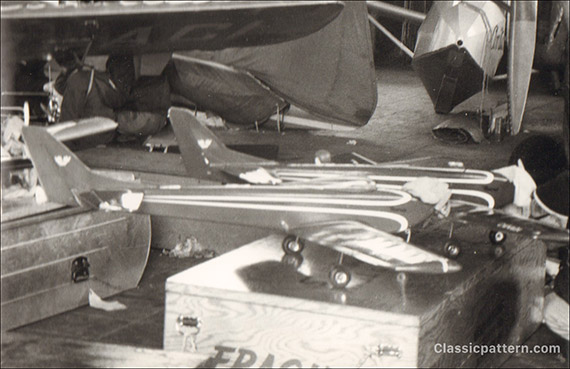 During practice, Chris Olsen was un-fortunate to smash both his Uproars, one due to a strong downdraught on takeoff, causing the model to cartwheel. The other model suffered a stuck aileron, caused by rain water in the equipment and was badly damaged in the ensuing crash. Fortunately, Trials fourth placer Peter Waters was on hand complete with models and hastily entered as reserve. 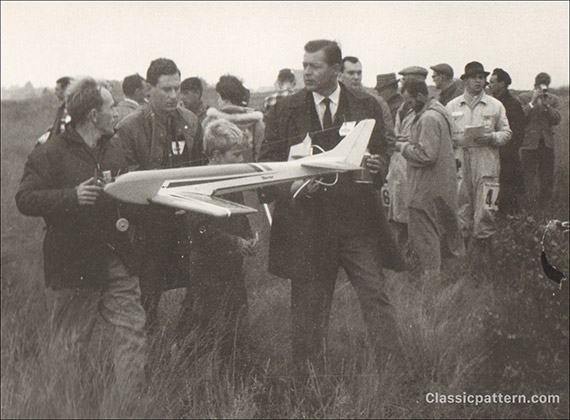 Murray Chercover from Canada and his beautiful Taurus

Dull overcast prevailed as the first round commenced early on the Friday morning and among the first called was U.S.A.’s Jerry Nelson, the first of the proportional men to perform. Gusty conditions did not help the big wing, long tail moment Cumulus and his motor cut during the second bunt for only 600 points. Peter Waters, first in for Britain, gave a very pleasing performance for over 1,600 points, which for some time stood second only to Ralph Brooke, the American, whose 1,924 point score indicated the advantage one could obtain with proportional control. Then Fritz Bosch broke through with a beautiful performance to return 1,724. 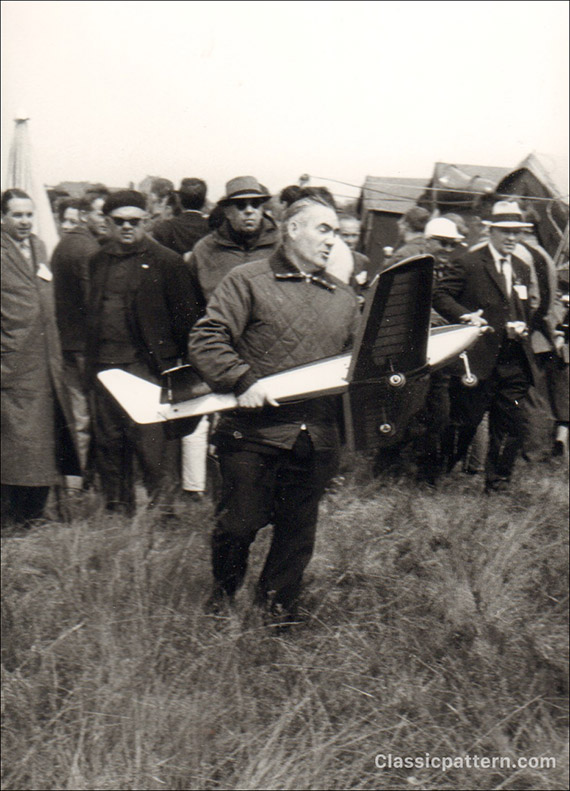 Second Briton to fly was Harry Brooks, last year’s co-champion, but after a poke of “up” to lift the Soraco from the tarmac, all response was lost as the model dropped left into the ground two hundred yards upwind. In complete contrast to Harry’s hard luck story, South Africa’s Monte Malherbe lost contact with his Sultan while high up, the model touring the surrounding countryside before homing back to the flying area where Monte regained control and completed the schedule. 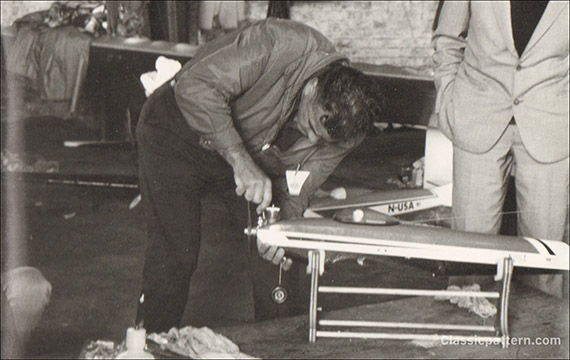 The Kazmirski reputation prompted everyone to watch his attempt during the afternoon. After a neat take-off the flight was not very inspiring, the light Taurus none the better for a rich engine run in the windy conditions. Perhaps we were expecting too much and as someone remarked, “Everybody was expecting the man to perform miracles”. Anyway, it was enough to rake up a score of 1,670 points. Last of the British team was Frank Van den Bergh still with the Skydancer he damaged at Kenley last year, even though it had a new wing. He had a new, smaller model but even so elected to use the Skydancer. Frank can always be relied upon for a smooth performance. Un-fortunately his motor cut during the spin, necessitating a deadstick landing which undershot the tarmac landing circle, loosing landing points. 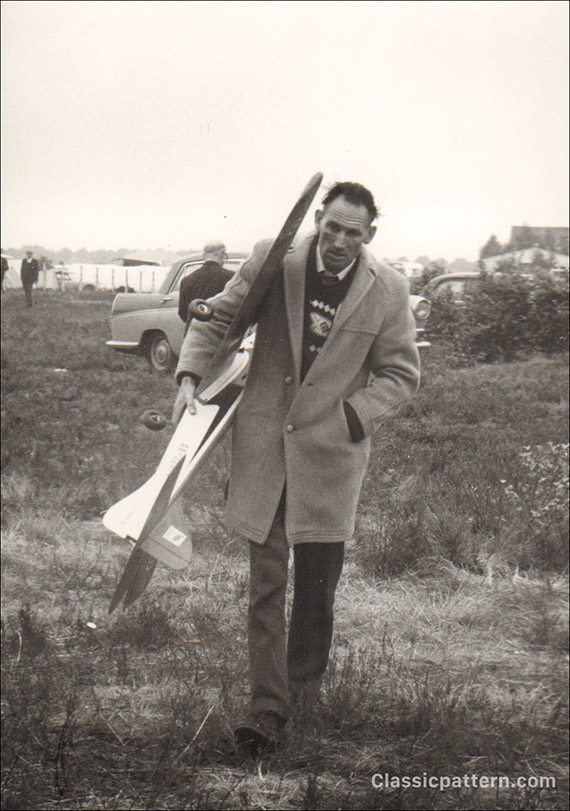 So at the end of round one, U.S.A.’s Ralph Brooke led the field, with Fritz Bosch from Germany exactly 200 points behind. Third so far was Ed. Kazmirski, while Cliff Culverwell from South Africa had climbed quietly into the number four spot. Fifth was Louis of Belgium while our own Frank Van den Bergh held sixth position. Two rounds now remained in which those who had re-turned low scores could make amends. 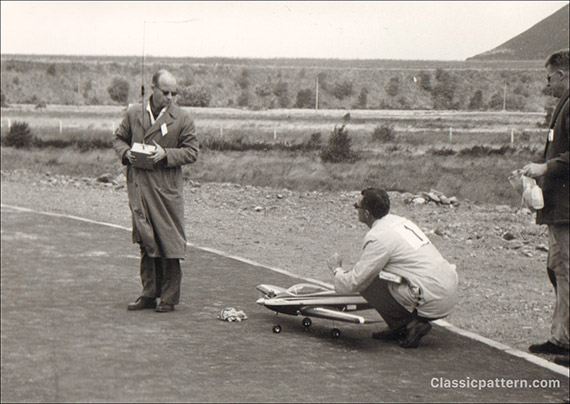 Britain’s Peter Waters was disqualified since he was an un-nominated entry, so Chris Olsen worked overnight to see what could be contrived from his two wrecks, test flying early next morning with a combination of thick 18% wing and fuselage from his other thin airfoil Uproar. 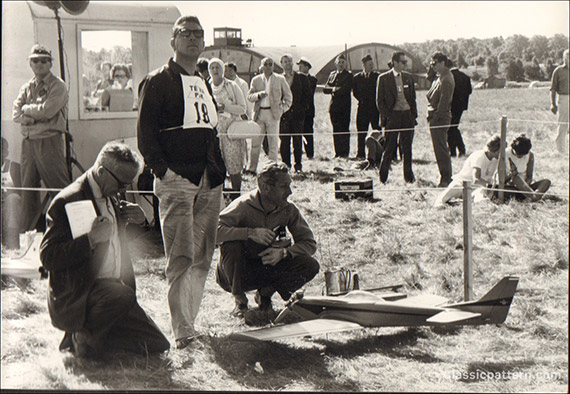 Strong wind still prevailed when the second round began the following morning. Nelson’s early flight improved over his first round score, completing the pattern for 1,556 points reflecting a few ragged manoeuvres. Brooks was first up for Britain, flying his reserve model, which lifted from the runway without mishap this time, completing the procedure turn and repositioned for the stall turn. The nose lifted and then the right wing tip swung over as the model began to point earthwards again. But the engine never recovered from low speed, ruining Harry’s chance of a high final placing and the prospect of a British hat trick with the team award. Olsen, now re-entered the fray, with a mid-day flight that brought him a creditable 1,559 points. Again Van den Bergh was the last Briton to fly, and this time his motor did not cut. Despite fierce winds he improved on his first round score with 1,625 points. 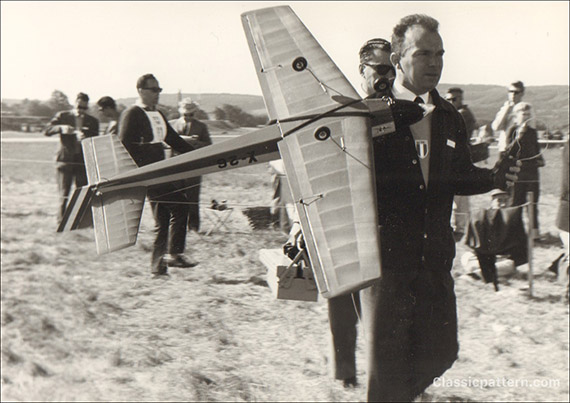 Americans Brooke and Kazmirski both returned lower scores this time, Brooke dropping to 1,806 (although still better than all but Bosch) and Kazmirski to 1,503 for a flight without a recognisable tailslide or spin. Fritz Bosch however, improved with 1,812 to the amazement of some onlookers. Culver-well was doing very well and fellow team member Jim Connacher had improved, although Malherbe had fallen back. Chercover of Canada maintained his score, but the other two Canadians, Tom and Hitchcox had fallen down on their first round scores, the latter re-turning only 825 this time. 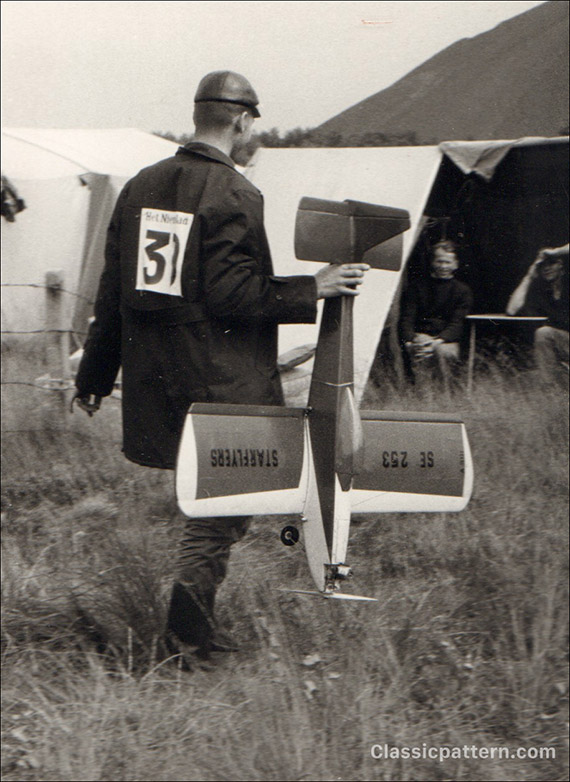 As the round closed, Brooke, U.S.A., was still in the lead over Bosch, though Bosch had improved his score. Cliff Culverwell now occupied number three position while Louis, Belgium, also moved up one place leaving fifth position for Ed. Kazmirski who had slipped back. Van den Bergh remained number six in front of Chercover, while Teuwen of Belgium leapt six places to number eight. Jim Connacher, South Africa, was now number nine followed by Marot of France moving down from seventh Position he held at the end of round one. 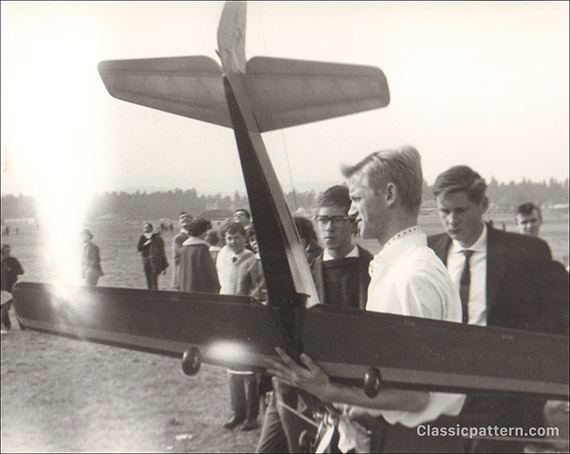 In the last round then, only Bosch stood any chance of deposing Brooke from the top of the score sheet, al-though it would require a good flight. For Van den Bergh there was still opportunity to place in the first four. Olsen could improve his position tremendously with another score like his second round effort, but for poor Brooks languishing at the bottom of the score sheet, the question now was one of lifting himself out of that un-happy position, which he could with a full schedule flight. 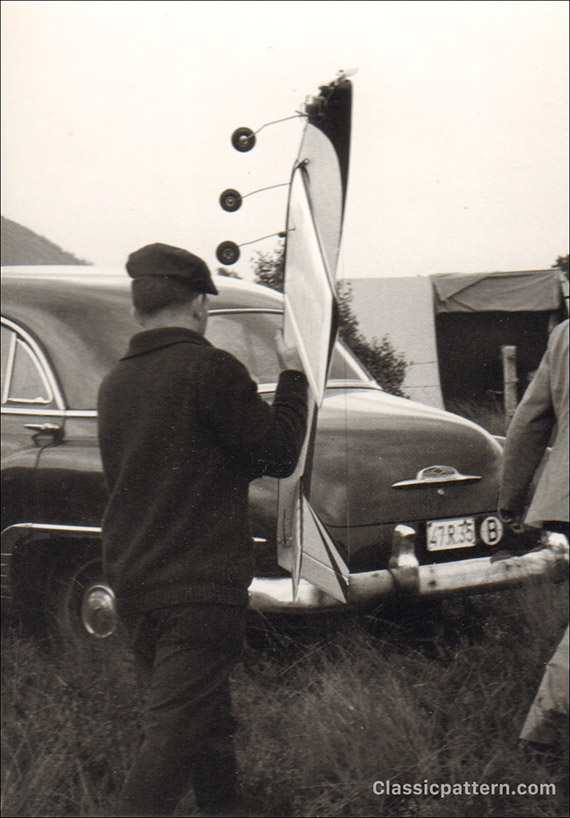 First to fly for Britain, as in round two, he managed a shaky schedule for 1,502. This round would decide everything, and although no competitor had much chance of catching Brooke or Bosch now, the Belgium, South African and U.S.A. teams each had all their members in the top half of the running score sheet, standing them in good stead for the team prize. Nelson, U.S.A., now more on his mettle used his proportional radio to good effect for an 1,800 point score. 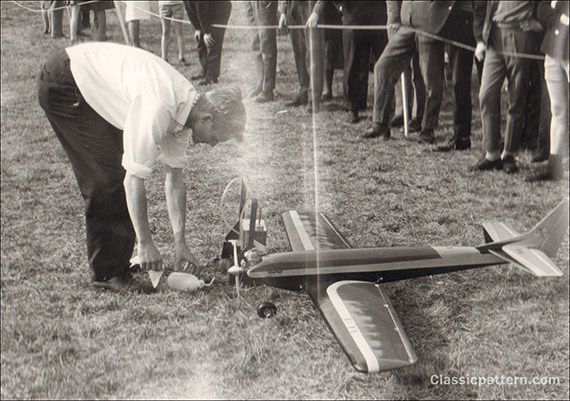 Belgium’s Louis managed a surprisingly high 1,783 and Culverwell made his best flight, returning 1,667. Hopes for an-other good score by Chris Olsen smashed like his Uproar when the elevator link sheared soon after take-off, and this was not the only prang during the round. Sederholm of Finland suffered the horror of seeing the wing col-lapse on his Uproar, one wing panel fluttering in the wind gusts long after the fuselage had raised a cloud of dust near the landing circle. 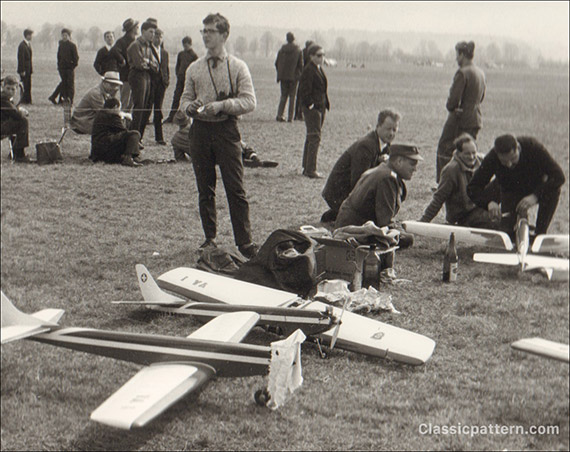 Eliasson too, flying the same Mustfire he brought to Kenley last year, broke the fuselage in two by hitting officials’ tents during his landing approach. South African Jim Connacher also picked up the pieces. His motor cut while the beautiful Taurus was low overhead at the completion of the inverted eight. An effort to roll out only caused the machine to dive vertically into the ground. Jim had earlier confided the secret of its amazingly light 5i lb. weight. Every piece selected like pulp, was his explanation, likely to burst like a bomb in a hard knock . . . and it did. 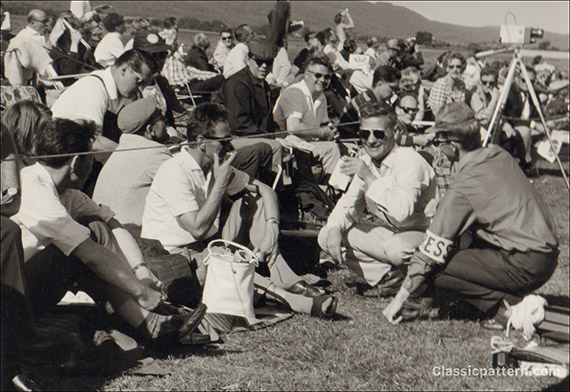 Frank Van den Bergh had a nasty moment when his motor spat during bunts. Happily, the engine continued to run and Frank returned 1,653, his best. Kazmirski’s Taurus refused to spin yet again but he scored 1,760 nevertheless. Both Bosch and Brooke were to be last to fly for their respective teams. U.S.A. were drawn earlier than Germany in the flight order so Brooke was first of the two. Hoping for an improvement on his second round score to clinch the championship award, he feil down on his previous performances, though not without performing the most beautiful of “near miss” tailslides seen during the event, his “Amanusa” (AMA N-USA) dropping several fuselage lengths before flipping over backwards. This really put Bosch in the running. According to F.A.I. rules an outright win requires a clear 2 per cent point advantage and al-though Bosch thus required a highly improbable 1993 points to win he could secure an equal first place with just 1,843, forcing a fly-off for the King of the Belgians Cup and this was a very possible turn of events. 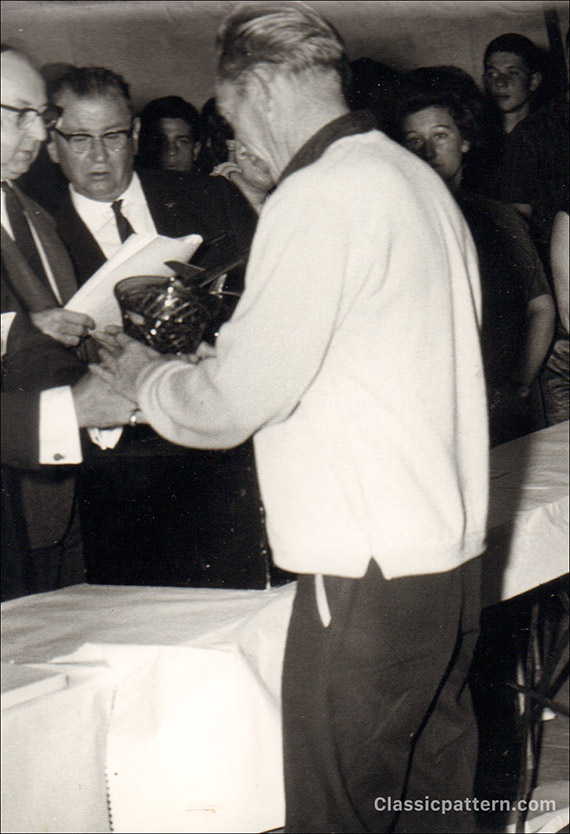 So a few flights later, out came Bosch with his Telecont equipped shoulder wing model weighing nine pounds. From start to finish it was a beautiful flight and quite the best we have witnessed personally. When the score was posted, there were loud cheers from the German spectators for Bosch during his flight, and again when his score was announced; 1,968 points, the highest of the meeting. He had very nearly won the champion-ship outright; an extra 25 points would have sealed it. 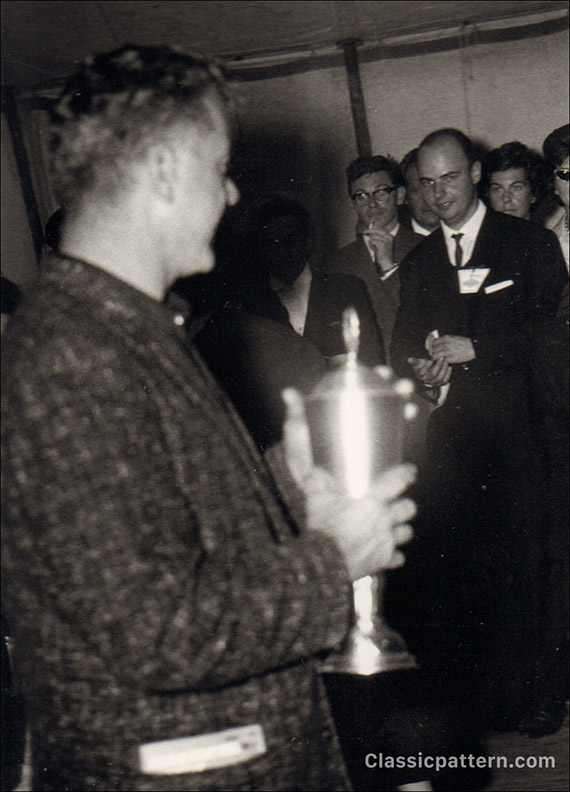 A fly-off would therefore decide the holder of the cup. The flip of a coin sent Ralph Brooke out first once more, to perform beautifully for 1,928 points.

Bosch failed to tail slide, dumb-belled his horizontal eights and did not inter-sect the overhead eight accurately. The spin was good and the landing approach beautifully square, but was enough for only 1,856. 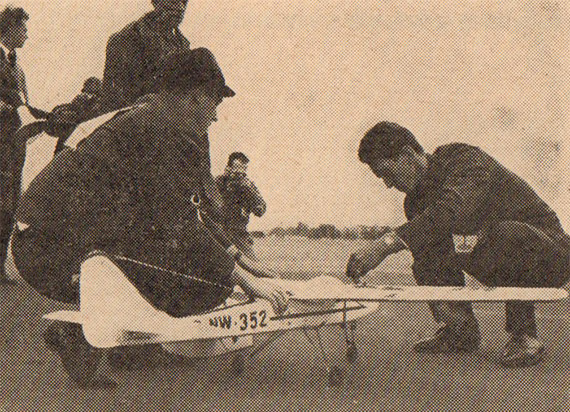 Brooke and Bosch were equal world champions then, while to Ralph went the honor of holding the King of the Belgians Cup.

Behind Bosch in the individual placings came Ed. Kazmirski in third position. Louis of Belgium was fourth and Jerry Nelson was now up to fifth place. Culverwell had now dropped to sixth place, pushing Frank Van den Bergh down a peg to number seven. Teuwen and Marot were eighth and ninth respectively and Harold Tom from Canada had climbed to tenth place. 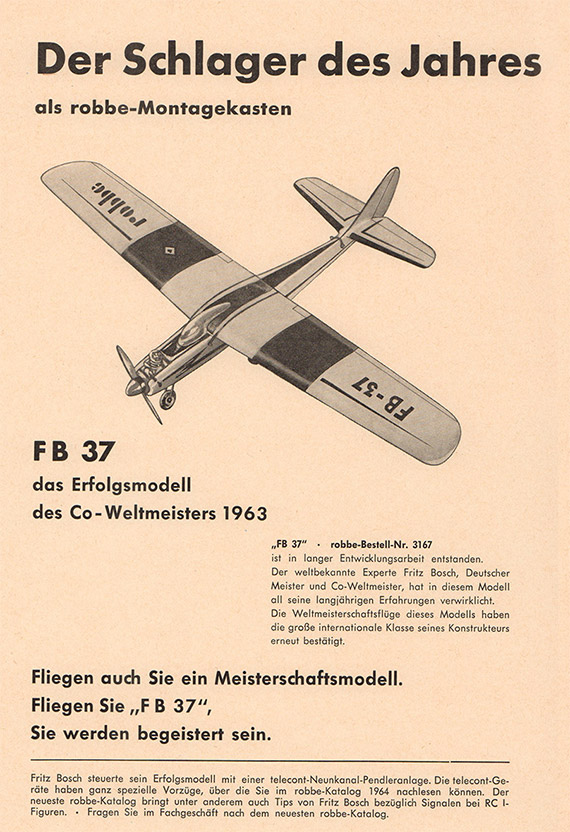 The team award went to U.S.A. with all three fliers in the first five, followed by Belgium. The South Africans were third and the Canadians fourth, while Great Britain, twice winners of the award were down in seventh place.

So ended the Third World Radio Control Championships contested by fifteen teams with temperaments ranging from the quiet purposefulness of the Canadians and the dignity of the Italians, to the boisterous French, notably the crazy Major Plessier, who provided many of the laughs.