By DEBORAH MARTIN … as you can see from the byline we pulled a switch with a member of the distaff side reporting the activities at Bremen! As a qualitative report of the bi-annual World Championships it covers all bases with clarity and full knowledge of everything that was taking place. Her insight as to the motivation of the competitors and philosophy at the end makes it must reading 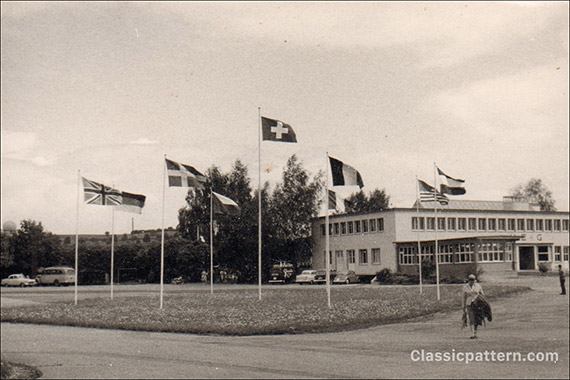 The contest was run by the German Aero Club at the VFW aircraft factory airfield about 15 miles from Bremen on the busy Weser river. 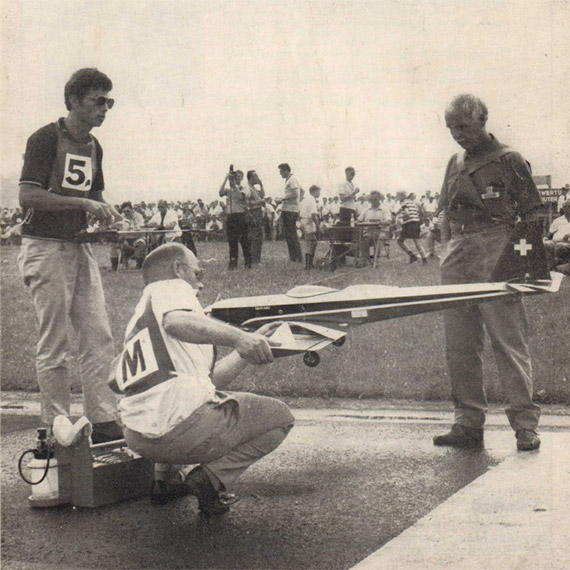 The daily briefings, bulletins, and PA announcements were done in three languages, German, English, and French. All flight scores were handled by computers and were instantly flashed on dis-play boards for the spectators. There were two flight lines about 1/4 mile apart. Each contestant flew four flights and his poorest performance was eliminated. A hangar was reserved for the models and transmitters, and there was even a free repair service in this hangar. Certain areas of the airfield and factory area were restricted “for reasons of safety and organization” (a quote from the official program.) The word “organization” really applied to this contest. Over the loudspeakers one afternoon the following announcement was heard: “All contestants will take shelter in the hangar at 4:00 PM. There will be a severe thunderstorm at this time.” At exactly 4:08 PM the sky opened with a drenching downpour. That’s organization!

The first two days were spent with a planned practice for all contestants. These hours were casual, and it was a delight to see flyers, press people, and spectators renewing old friendships. Needless to say, the whole world bene-fits in the camaraderie of a shared sport. 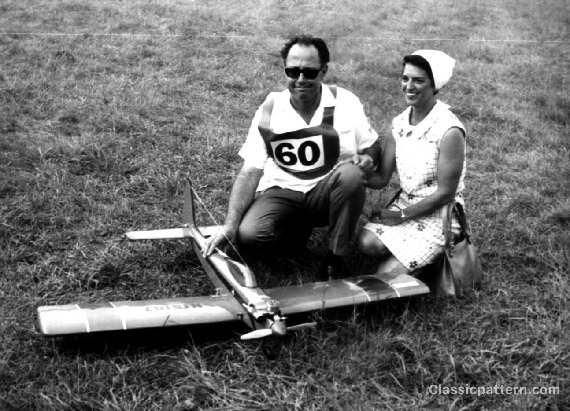 Phil Kraft with his wife and Kwik Fly MKIII

First American to fly was Jim Kirk-land. His engine wouldn’t start—faulty starting battery. He rushed through his first flight thinking he had only 7 minutes left. FAI rules, however, allowed 3 minutes to start, and then 10 minutes to fly after the start. (More FAI contests in the USA would have benefited the American team.) Jim flew a Lanier “Citron” and used the new Pro-Line digital. Jim flew well on his next three flights and scored 3551 for a 9th place among the 67 contestants. 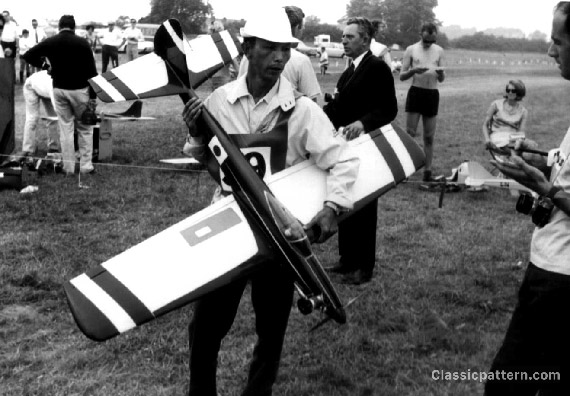 Jim Whitley of the USA flew a Lanier “Daddy Rabbit” fuselage with a Lanier  Bronco wing. His radio equipment was his own manufacture Pro-Line A Frenchman and a Belgian reporter were heard to comment that Jim scored more for his flying Between maneuvers than most flyers did on the maneuvers them-selves. His presentation is superb. His final score of 3437 gave him 10th place. 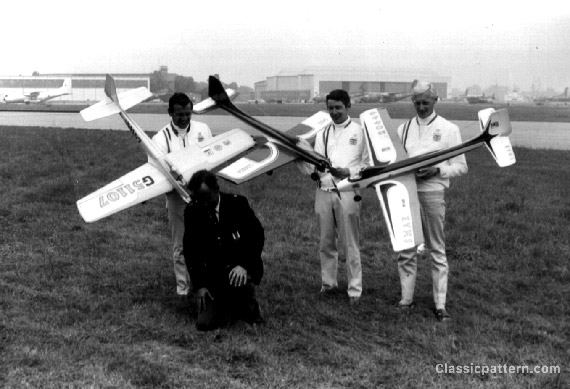 2nd place Phil Kraft with 3965 point was up last for the American team. His obvious fame produced enthusiastic crowds for his flights. He flew his Kwik Fli III with (of course) Kraft digital. Three TV cameramen were seen photographing one of Kraft’s flights. The first thought was that they were photographing his flight because of his previous championship. But later it was learned that the TV men felt that he was the only contestant who kept his pattern in constant camera range. His presentations made him a favorite with both the spectators and the judges.

The judges put in long, sometimes very hot, days without rotation. They had been well briefed by  Maynard Hill. But, as at every contest, some people bickered about scores. However, until something better comes along besides human beings and individual impressions about scoring, the judges’ efforts should be respected. 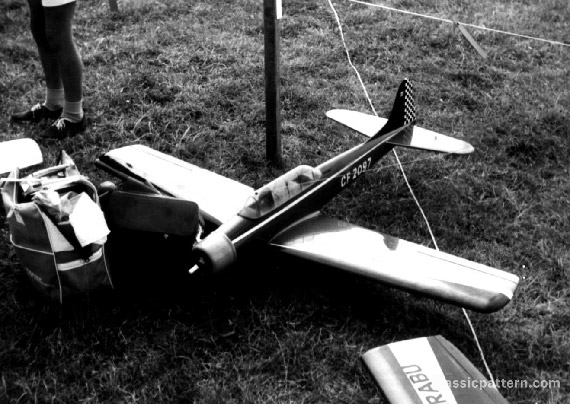 The USA team wouldn’t have been complete without the help of mechanics Len Purdy, Sid Axelrod, and Jim Edwards. Jim Edwards brightened everyone’s days with his constant humor and enthusiasm. Team manager, Ron Chidgey handled the tension of competition with constant calm. His steadying influence on the team set an example for all future team managers. 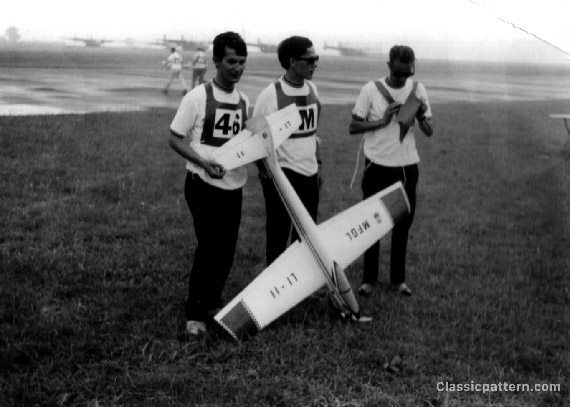 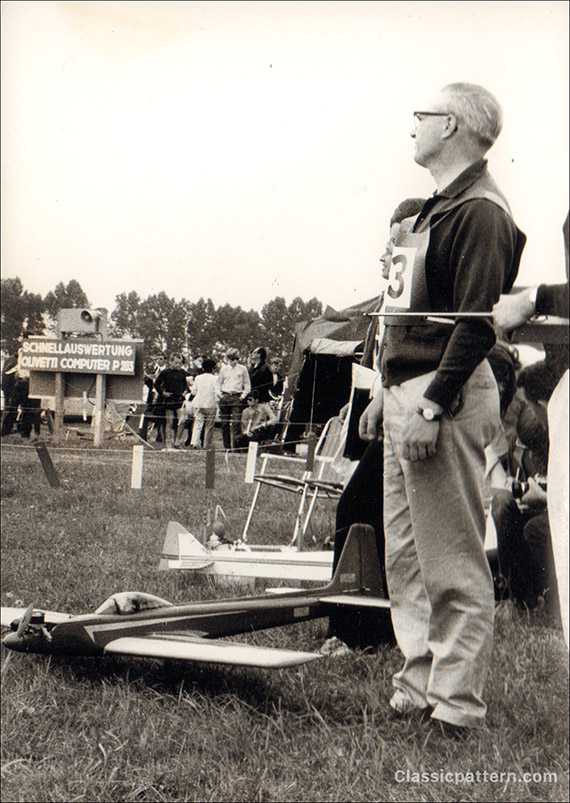 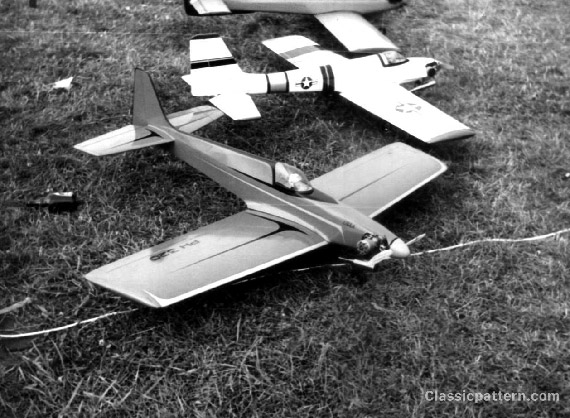 Canada’s Harold Tom had excellent flights with his “Marlin”, Kraft and Veco placing a solid 1 1 th. Ron Chapman flew his original un-named air-plane which looks something like a T-6 with CRC digital to a respectable 24th place. Warren Hitchcock with CRC digital and a “Firebird” started off much better than his 37th place would seem to indicate. The Canadian team’s 7th place overall is extremely good for their second stab at this contest. 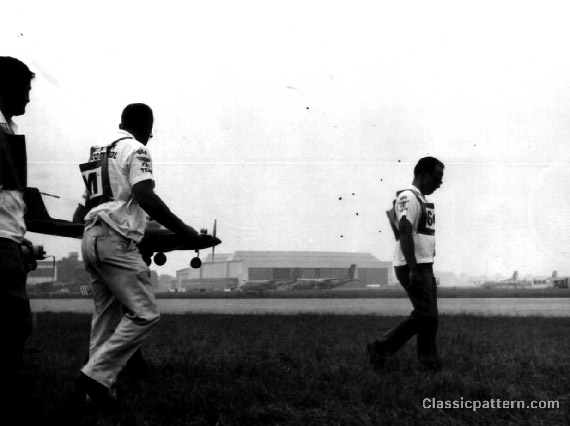 The 4th place South African team all flew Logictrols. 30 year old Rich Brand placed 8th with a mid-wing “Spitpanzer”. He has flown RC for four years and flew control line since age 7. A weapons training pilot, he manages to practice RC flying three times a week. He also has an entire airfield to himself, so his practice was unburdened by spectators and other fliers. When asked what he enjoyed most about this contest this fine sportsman said, “I like a challenge and I’ll be happy with whatever place 1 get.” 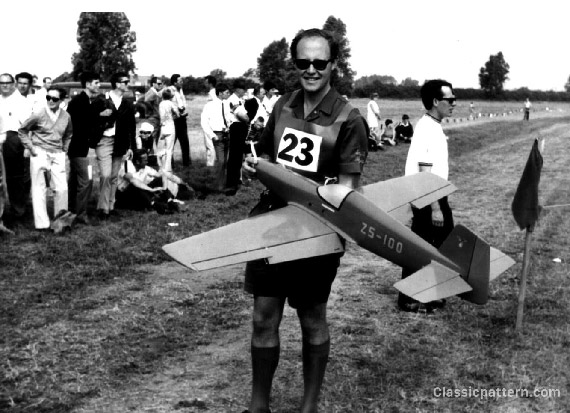 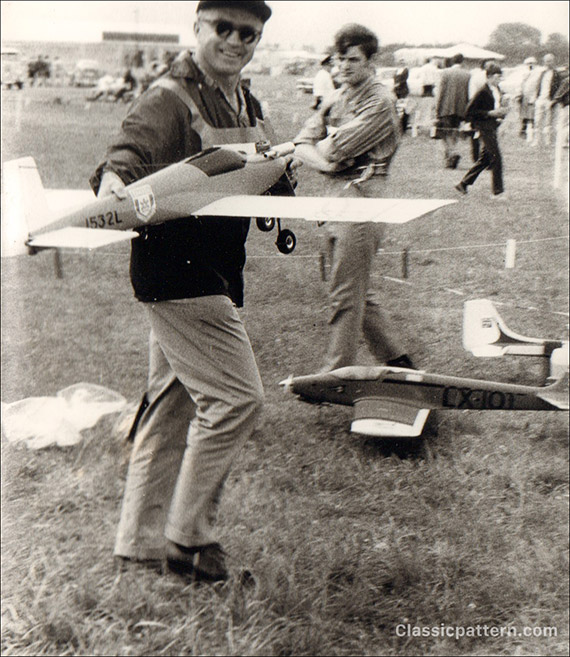 21 year old Wolfgang Matt from the tiny country of Liechtenstein flew his “Super Star” using Simprop equipment to sixth place. Matt has flown RC for only three and one half years, but he keeps sharp with a practice session every other day A conversation with him was cut short by the team manager’s curt: “Enough! Wolfgang only interviews for TV. 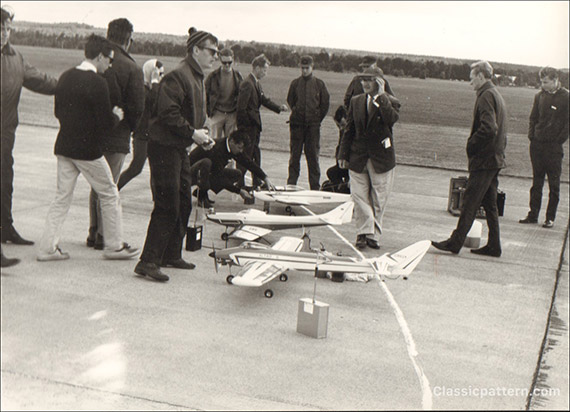 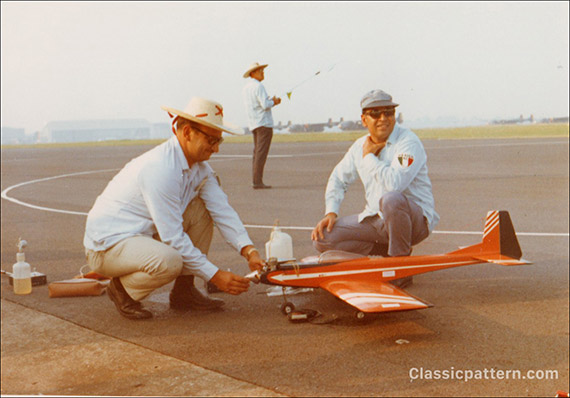 The Netherlands were represented by 18th place Matt Bruls with a “Baby Kompromiss”, 33rd place Jan Van Vliet with a very sharp looking “Libra”, and by J. Tromp (35th) with a “Flits”. The Dutch are delightful fellows, and particularly Windy Kreulen a Dutch hobby shop proprietor who helped in getting interviews, and translations, and even offered a place at his table with the Dutch team at the crowded awards banquet. 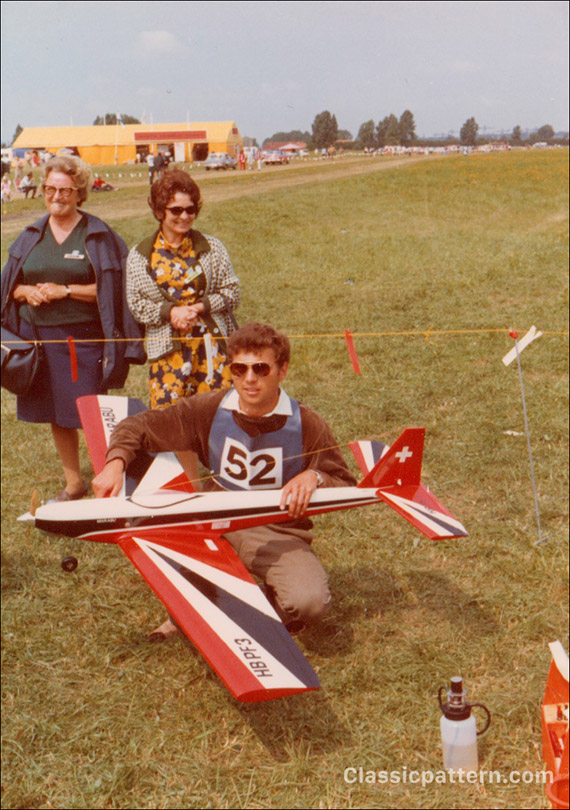 Norway’s 12th place team was placed by Poju Stephanson with his “Maximum 9”, Tore Paulsen (42nd) and Knut Aker (39th) both with “Skarabes”. On the last day of the contest Poju brought out a North Pacific glider. He trimmed it out and flew it oblivious to the intense RC competition going on around him. 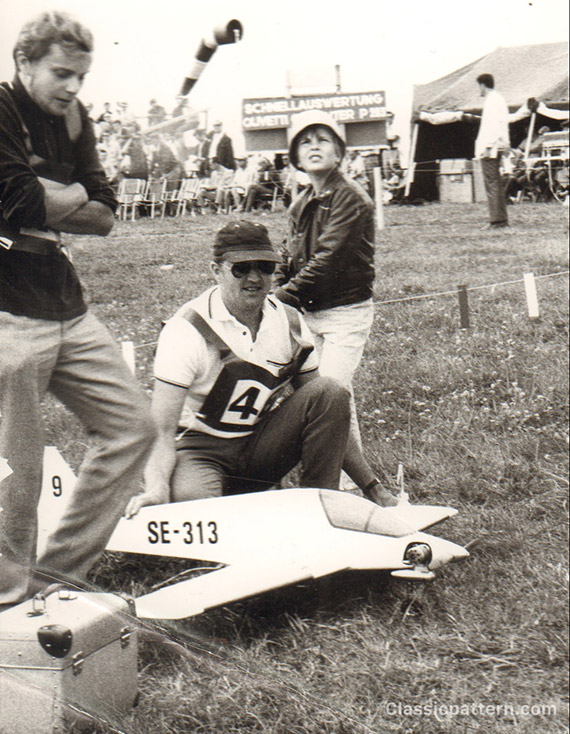 From Austria came Heinrich Sekirnjak (27th) and Heinz Sekirnjak (34th) and Franz Schachinger (30th) who surprisingly was the only Austrian to use the Austrian made HP 61. There is great enthusiasm already about the 1971 Internats which will probably be held in Austria. 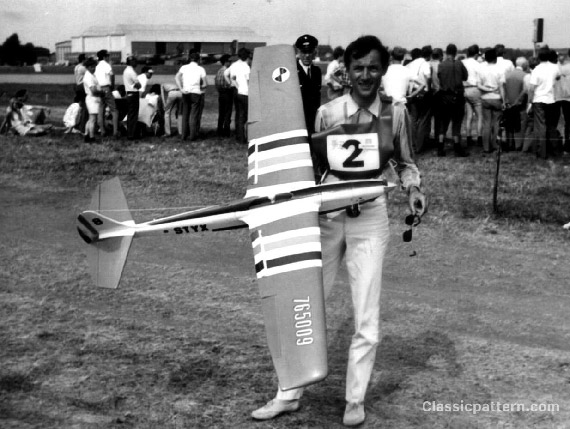 Belgium was represented by Rossi 60 flyers, Georges Haegemenn (29th), Pierre Gobeaux (38th) and Alfred Leine who crashed twice due to either radio interference or failure and ended up 63rd. Apparently some doctor in a nearby town had his diathermy machine on, and this showed up on the monitor. 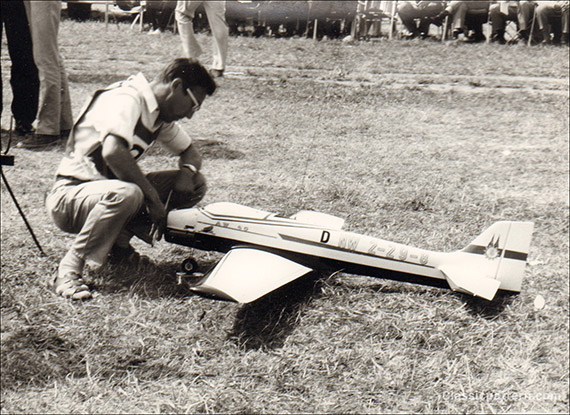 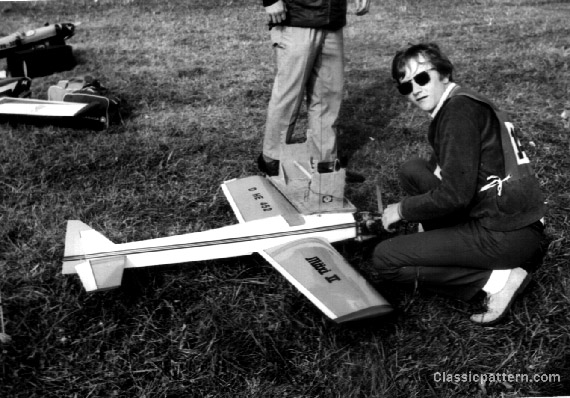 Heinz Elsässer mit seinem Mäxilt was quite interesting to have East Germany competing for the first time. Lutz Schramm (44th), Ronald Fischer (57th), and Erich Wenisch (62nd) all flew original designs. Lutz Schramm’s sober facial expression never changed during an interview. He rather gloomily acknowledged that the fact that his teams’ lodgings were 30 miles away from where everyone else stayed was disappointing as he had hoped to learn something from conversations with the other flyers. 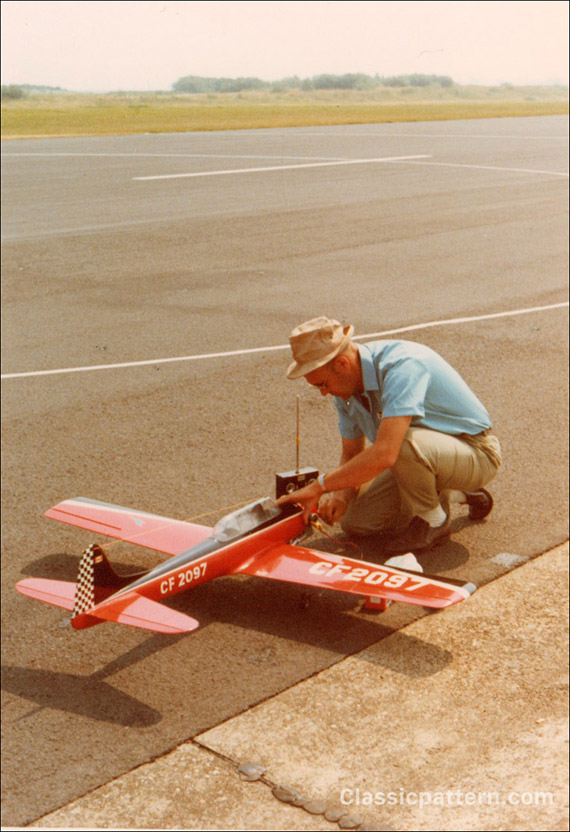 There are no hobby shops in East Germany, so he gets his wate-rials through his Aero Club from West Germany. When he was asked which country he would like to see win he avoided answering. He said he was just here for the sport. 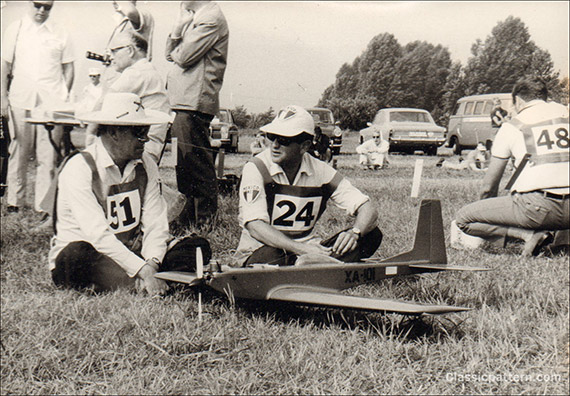 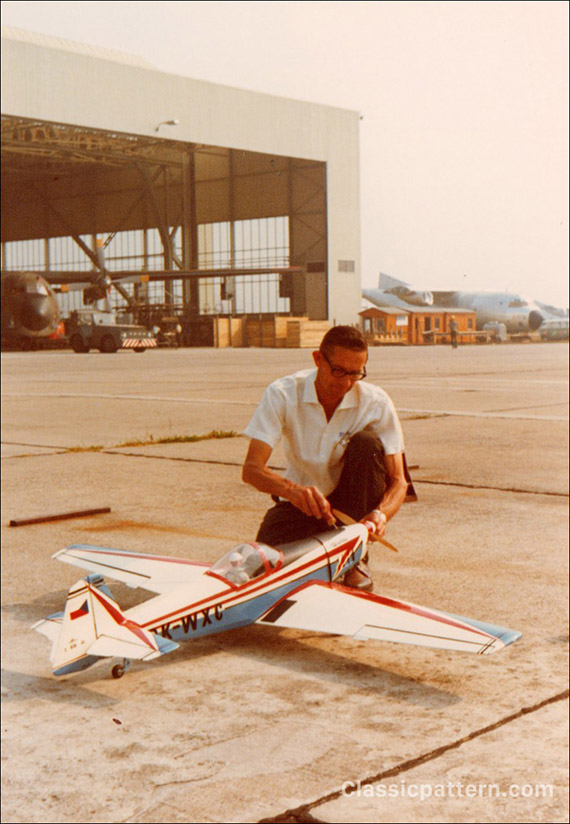 The team from Great Britain was man-aged by gregarious Roger Hargreaves. 13th place Mike Birch (who looks like a potential winner) flew a “Moonglow” with Skyleader digital. Dennis Hammant (17th) flew a much scaled down “Spectre” with Skyleader digital. 23rd place Steward Foster flew an “Equalizer” with a Sprengbrook. All uSed Merco engines. This entire team should get some sort of award for congeniality. 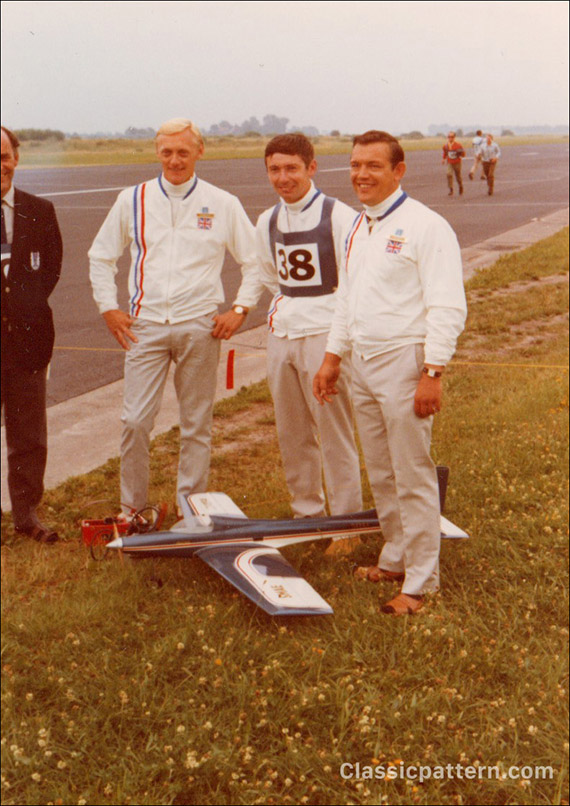 Italy’s Granziano Pagni (20th) had substituted in the Italian nationals for a man who was late. He won and qualified for the Internats. Guglielmo Reda (31st) and Luciano Reineri (41st) completed the team. 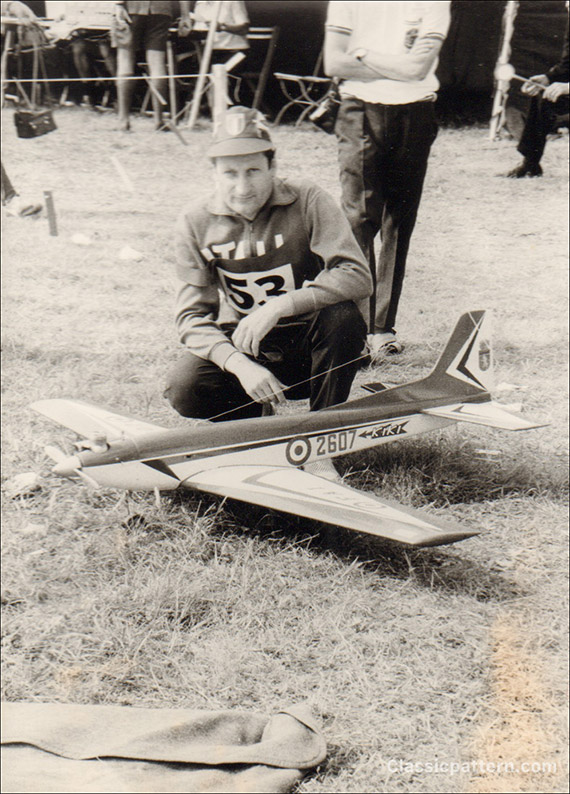 Fourth place Pierre Marrot with his “Styx” plane, his own Radio Pilote digital and a Rossi 60 that used Pierre’s own design muffler was France’s hero at this contest. His fast flying flew overhead as did 5000 spectators. Later this great hulk of a clown posed for pictures stretched out on the ground with a multi-striped umbrella shading his grinning face-quite an exhibition! 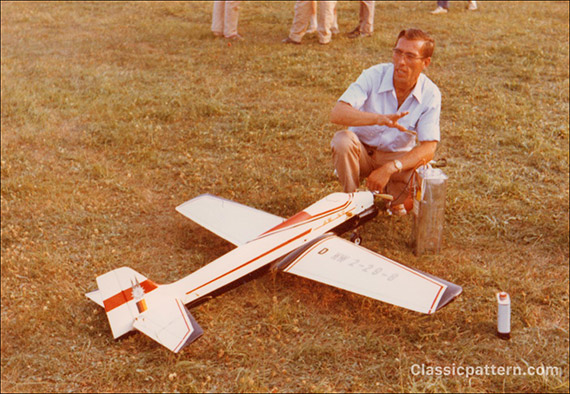 At the awards banquet Giezendanner received the Challenge Cup of His Majesty Baudouin I of Belgium. The first three placers were awarded victor’s medals, and all competitors got souvenir medals. The winning team received a prize from the contest Sponsor. 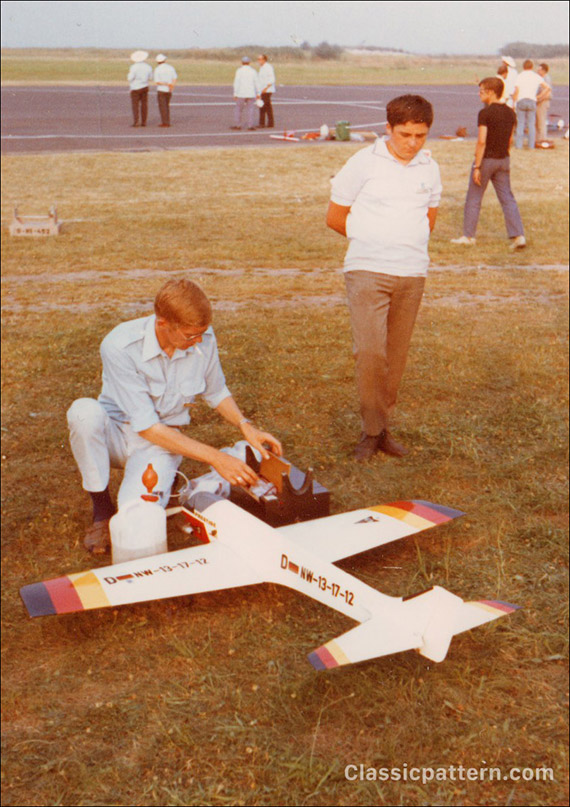 The ultimate achievement of a contest such as this is not the winning of it. The real accomplishment is that some highly motivated men have exercised their ability and their desire to create something. The work of earning a living sometimes stifles a man’s creativity. A woman’s life, on the other hand, is to create. She bears the children, arranges the spring flowers, and contrives a tasty casserole. 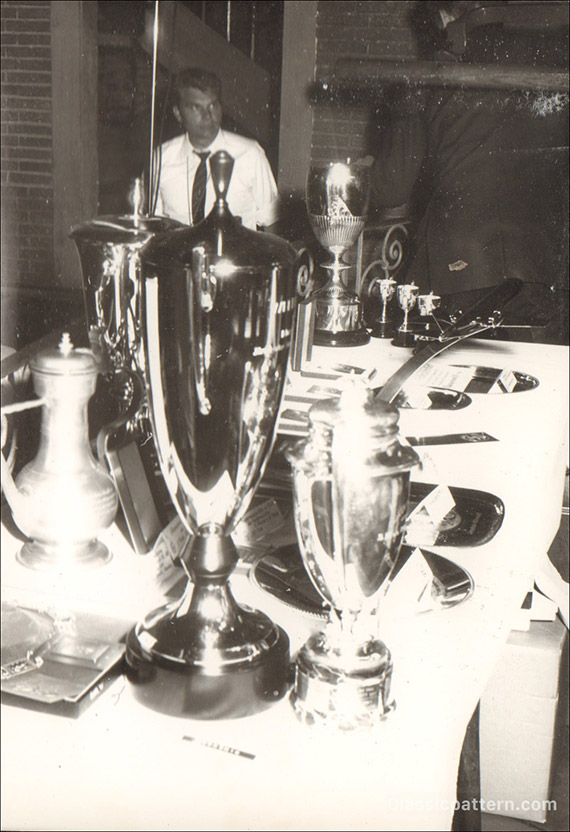 A man needs to set aside some hours in his day to fulfill his creative urge. Instead of spending the evening remembering the frustrations of the day a man needs to depart to his shop. Here is his world of freedom to create. Whether it’s sanding a wing spar, or putting the final coat of dope on his airplane, this may be the only creative moment of his day. When he completes his model he can risk it by flying it. 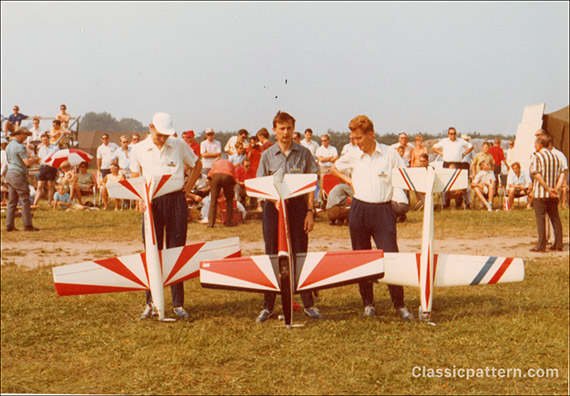 When he masters this he is indeed a champion in his own eyes. The realization that he IS a creative human being helps him to attack the routine jobs that he is required to do with renewed strength. In this way, and through this hobby, a man becomes complete.