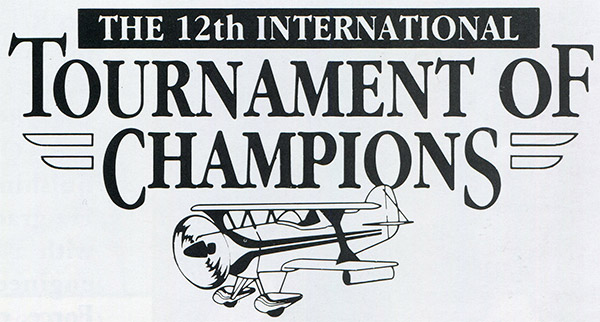 The world best aerobatic pilots compete for the largest purse. THE CROWD stood motionless, eyes staring, Jaws dropped low In disbelief. The eerie silence was broken only by the incessant buzz of propeller blades slicing air.

Eyewitnesses struggled to distinguish between the Illusion they were seeing and the principles of aerodynamics they were thinking. How could an airplane keep its nose and tail essentially level, yet descend and ascend yo-yo style without forward motion? 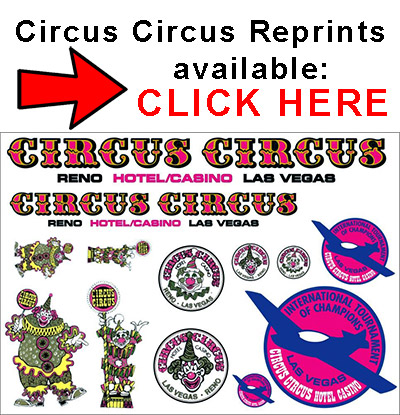 No, this it wasn’t a helicopter or a miniature Harrier. This seemingly impossible feat was being performed by master aviator and techno-wizard Quique Somenzini during the freestyle competition at the 12th International Tournament of Champions in Las Vegas, NV (October 27 through 30, 1994). 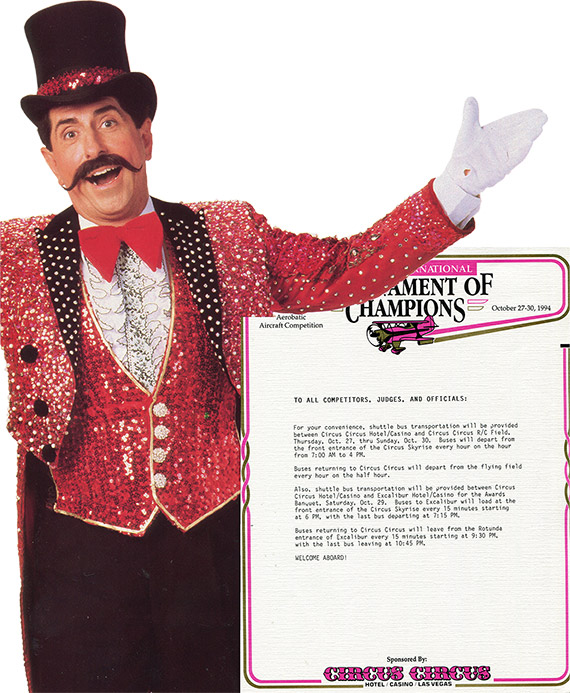 For those who are not familiar with the biennial Tournament of Champions (TOC) contest, let me explain some of the criteria. First, it should be known that this contest, which was founded by and is supported by William Bennett, chairman of Circus Circus Enterprises Inc., is by Invitation only. Although the exact method used to select the 19 competitors is unknown, only the very best make it. Regardless of position, every TOC pilot got a chance to be invited.

Along with Mr. Bennett’s mention at the banquet, Steve addressed the rumor of the contest`s demise and reaffirmed to me that the TOC tradition will continue. Steve Rojecki, who made his debut as contest director in 1992, did a fine Job of running the event with a terrific support test’s demise and staff.

Steve was the first American to win the TOC (`84), and he placed second in 1990. These accomplishments and his experience with the Airforce and commercial airlines make Steve very valuable to the TOC. 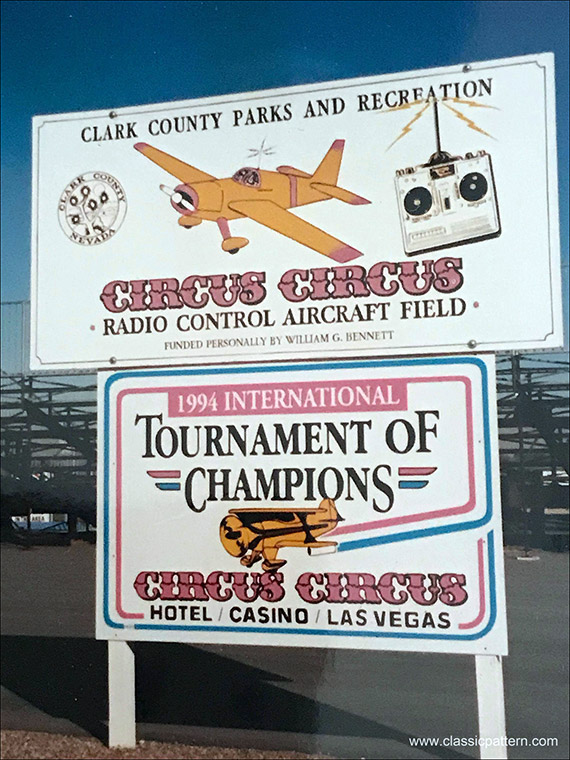 This was my fourth consecutive TOC; over this eight-year span, it’s beyond belief how technology and pilot proficiency have evolved.

As mentioned in the sidebar, the size of the motors doubled, and in some cases, the planes’ sizes increased from about 30 percent in 1992 to 44 percent in ’94! I heard scuttlebutt that some of the Europeans and the Japanese didn’t attend because the cost of the machines for this TOC was a bit overwhelming.

THE PLANES…THE PLANES!
Geoff Combs did a beautiful job on the design and glasswork of his Extra 300S. Steve Stricker and Dave Van Linsowe both flew them, and it’s quite creditable that two out of three of Geoff’s ships made the finals.

At the end of the contest, Dave Von Linsowe’s Extra 300$ was for sale at $10,000! Now, if that’s the cost of one airplane, imagine what expenses the pilots incur to get to the TOC. 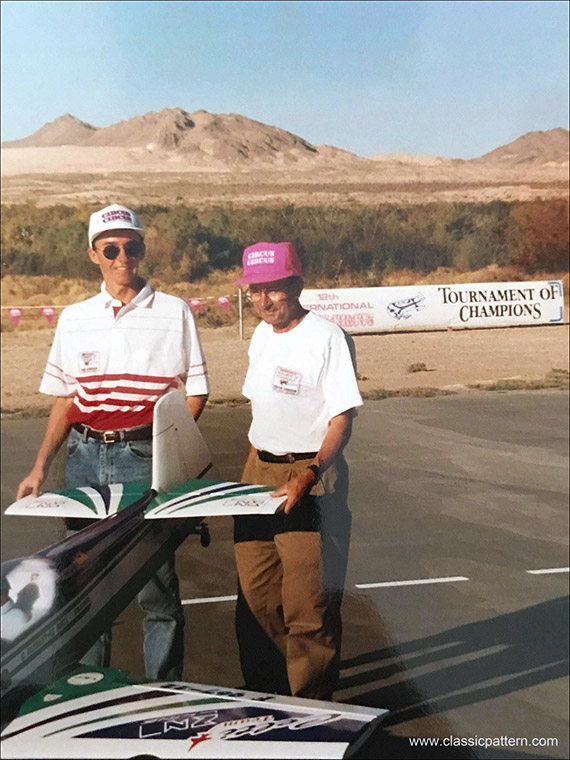 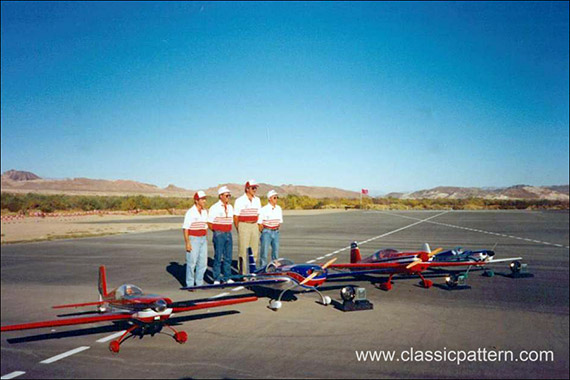 Futaba radios were predominant, and the 3W 120 twin (distributed by Desert Aircraft) was the dominant motor. Almost every plane had many custom parts and hardware. To compete in this game, you have to dedicate a lot of time exclusively to perfecting your flying skills and the technological status of your model—a pursuit that can be quite trying on personal relationships and outside careers. 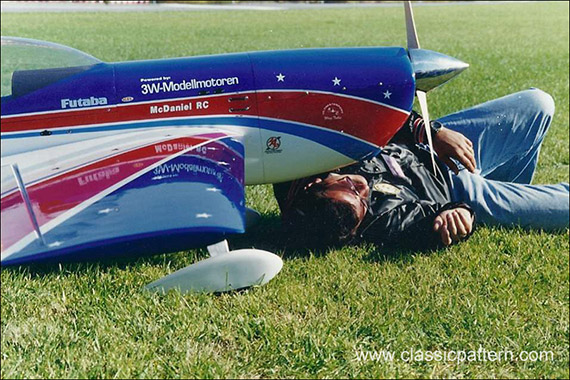 DAY ONE
Most of the flying was quite good. Quique Somenzini and Geoff Combs had radio problems that adversely affected their presentation. 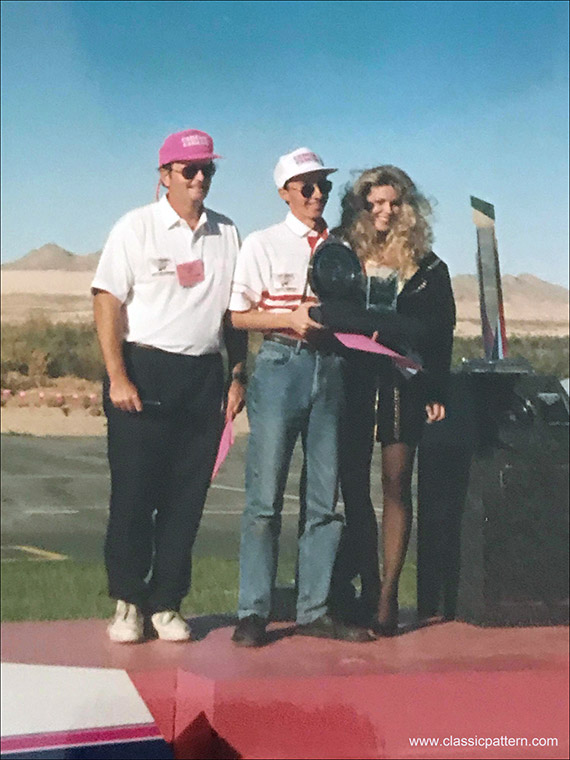 Colin Campbell’s ship went into radio hold and, when it at last broke loose, its wing folded, and it crashed. Unfortunately, Colin had lost his backup ship before the contest, so he was out of it. 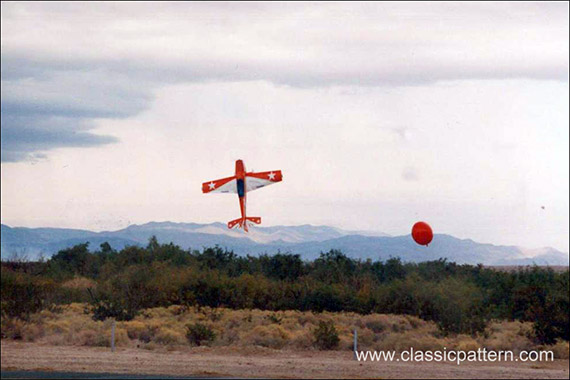 The biggest surprise was French newcomer Christophe Paysant-Le Roux, who made it clear that he intended to make the finals. His geometry and technique were superb, leaving no margin for subjectivity in scoring— excellent textbook flying.

We saw the first freestyle flight; TOC freestyle is a must sec’ Although credit must be given to all the pilots, Quique Somenzini’s freestyle performance was like none ever before seen.

As well as unbelievable torque rolls (of which Chip Hyde and Quique Somenzini are the masters),

Quique made his Extra 300S hover, and he slowly moved it up and down while holding it in a horizontal position!

Let me clarify this: the ship was not moving forward to create lift, yet it rose and fell as if suspended from a rope at the nose and tail—mind-boggling! 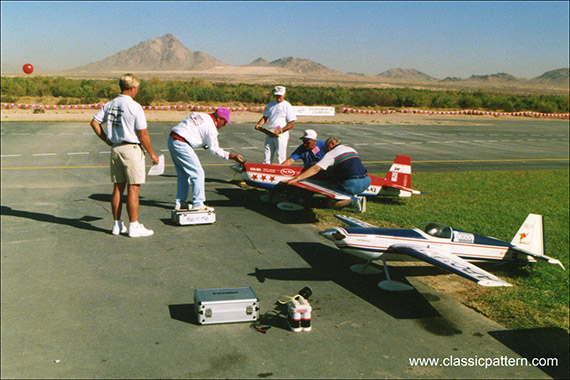 At the end of the flight, the judges raised their brows in disbelief and joined the audience with applause.

This presentation made a positive impact on the judges and helped Quique later, during the contest. By the end of the day, the top five were fairly well-established, with Jason Shulman being a possible threat for fifth.

DAY THREE
This was the final qualifying day. During the known sequence of maneuvers,

Gene Rodgers folded a wing and lost his ship. Geoff Combs still had radio problems but reluctantly completed all the rounds.

Christophe Paysant-Le Roux won the known sequence and was obviously getting stronger as the contest continued.

The amazing thing about this was that Chris’s ship was not large enough to receive a bonus score. Steve Stricker won the unknown sequence with an outstanding display of beautifully drawn geometric designs—a pattern that he had never before flown.

Many are convinced that no other pilot in the world can make a marginally powered airplane perform like Steve does.

In 1992 , because of its large size, his Ultimate was perceived to have effectively about 25 percent less power than the rest of the field. Steve made it fly as if it had as much power as any other one.

This year, Steve again proved that he’s the master of marginal power by showing crisp, clean vertical lines after snaps and maintaining heading no matter what his 49-pound 300S wanted to do.

At the end of the day, Quique Somenzini was first to qualify, and he was followed by Chip Hyde, Steve Stricker, Christophe Paysant-Le Roux and Dave Van Linsowe. Jason Shulman (a name to watch) did an excellent job in his first TOC, finishing sixth and not far from making the finals.

THE FINALS
As the sun broke over the mountains of the Nevada desert, I looked out through my hotel window at down and tried to imagine what the finalists were feeling.

After months of preparation and three days of intense competition, it was time to face the scrutiny of the judges, the other competitors and the week’s largest group of spectators—a highly charged situation.

Remember that the pilots take into the finals only the intangible impression that they’ve made on the judges; apart from that, it’s like a brand-new contest, and anything can happen.

During the finals, Steve Stricker won both known sequences with Quique Somenzini dominating the unknown and freestyle sequences. Chip Hyde had respectable unknown sequences, but he lost his motor during a sorely needed known sequence.

Everyone has a bad day and this seemed to be the case for Chip in the finals. Christophe Paysant-Le Roux flew consistently well, and Dave Van Linsowe was more hot and cold.

Some of the pilots told me that Quique was doing tumbles instead of snaps during his sequences, but his winning margin was so great that it probably would not have mattered. At Sunday’s end, Quique fulfilled a dream by winning the 1994 TOC. 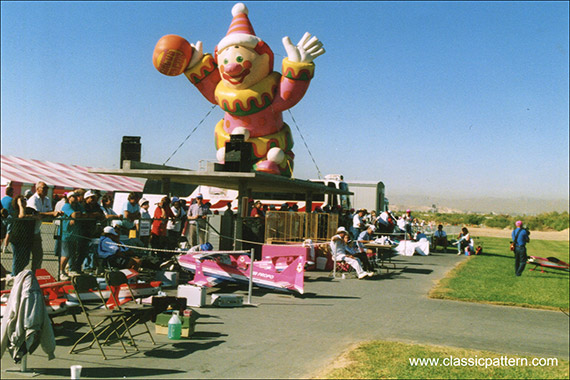 Of the five finalists, Christophe Paysant-Le Roux was the only pilot who didn’t receive a bonus because of the size of his aircraft. If he had flown a larger aircraft and scored just as well, he would have bumped Steve Stricker from second to third. It wouldn’t have been as close if Stricker had scored better on his freestyle sequences. Hint! Hint! But these pilots are the cream of the crop and put on a fine display of aerobatics. At the end of the contest, accompanied by Miss TOC, Debbie Ellis, Steve Rojecki presented trophies and checks to all the finalists. 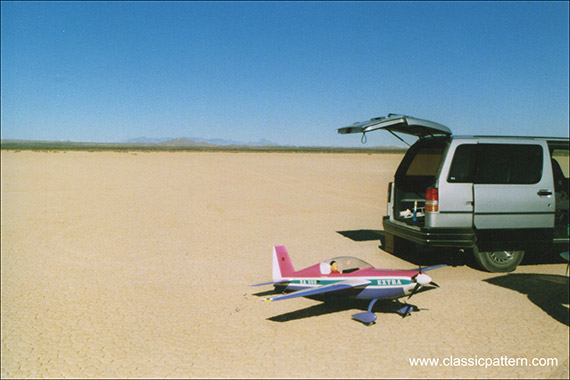 CONCLUSION
The Tournament of Champions owes its spectacular success to the sponsorship of Circus Circus Enterprises and to Bill Bennett’s participation. The event is the pinnacle of R/C aerobatics competition, and all who have participated are extremely grateful to Bill. During the awards banquet, to show gratitude for his efforts, Bill Bennett was presented with a 1/2-scale Laser built by Frank Knoll, Bob Noll and several others. lt was a very special moment. Hope to see you at the 1996 TOC! 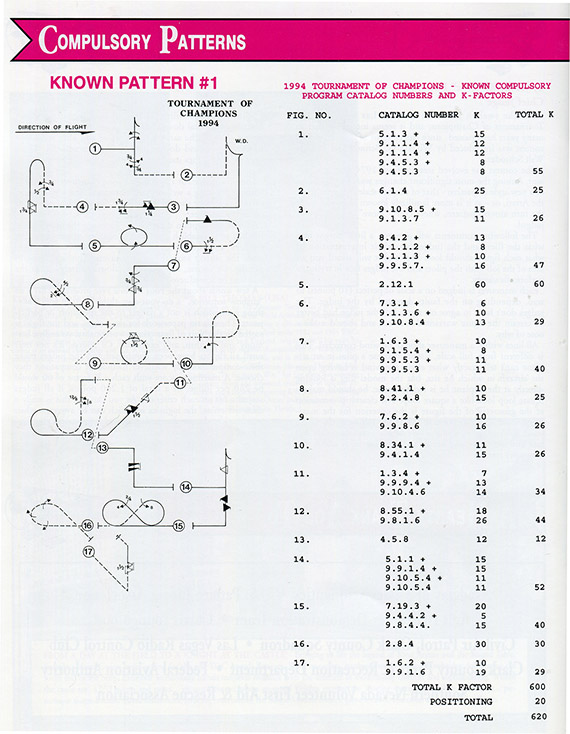 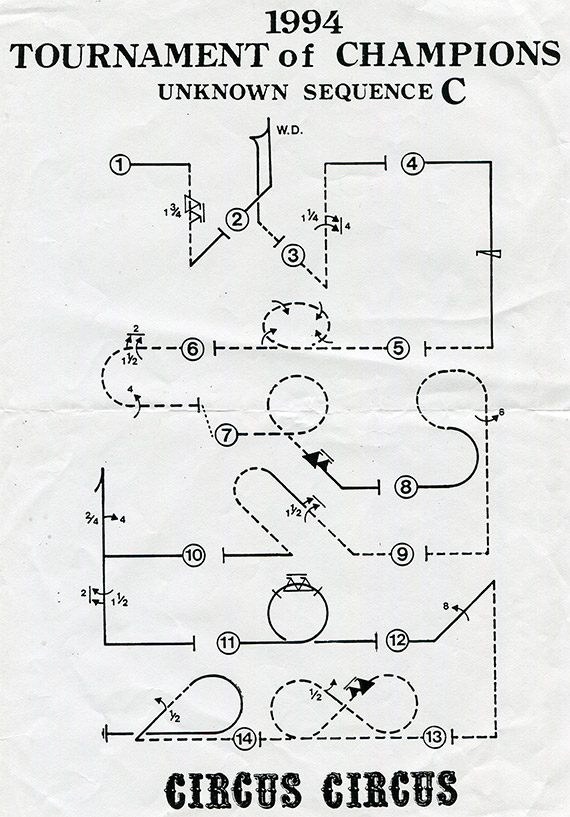 To give you a better understanding of the demands made of the TOC pilots, let’s examine the Format used to score the flights. As in ’92, this TOC used three elements to judge a pilot’s ability:

• Known Sequences—two different maneuver schedules that are given to all competitors about a year before the contest. In ’94, it accounted for 30 percent of the total score (40 percent in 1992).

• Unknown Sequences— given to the pilots each evening to be flown an the following day without practice. The five pilots in the finals had to fly two unknown schedules that would account for 50 percent of their scores (40 percent in ’92).

• Freestyle—where the pilots show their stuff! With 20 percent of the score on the line, the pilots perform an original 3minute routine. Most had smoke systems and used music to enhance their presentations. 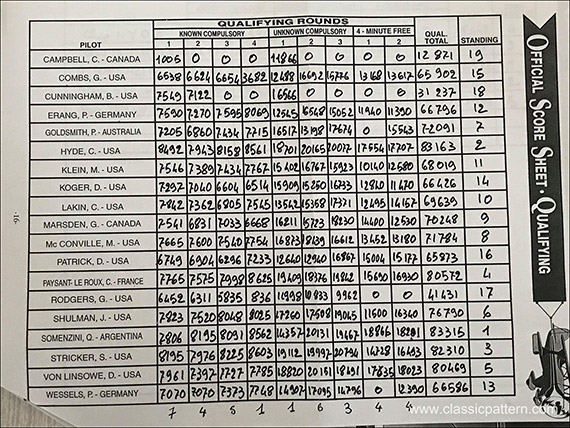 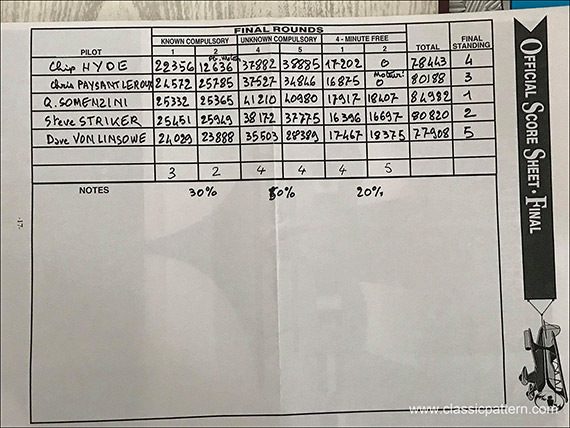