Review of a historical development of WEBRA model engines in Germany and Austria. We thank Mr. Gerhard Kaineder for documenting the history of Webra. The retirement si him begrudged!

Where it all began

Model engines from 0.5 to 10 cc were produced as an independent product.  With the development of a self-ignition engine, so-called “diesel” model engine*), Bragenitz tried to bring the Webra 2.46 to the market in 1948 and that with success. The trademark “WEBRA” (WErner BRAgenitz) was born.

It was at the beginning of the 50s where in Berlin-Schöneberg the company “Feintechnik Martin Eberth” planned to manufacture model engines. The owner, Martin Eberth, was previously engaged in the manufacture of precision mechanical parts, devices, gears, worms and so on.

In general, it can be said that the development of model engines was still in its infancy. It can therefore be considered a stroke of luck that Martin Eberth and Werner M. Bragenitz met in the course of 1950. Both saw a great opportunity in merging the two precision engineering companies into one.

The post-war period was an economically turbulent time: distribution channels and new partners were sought. Bragenitz and Eberth merged their precision engineering companies. In the following years, after various restructurings, the company “Fein- und Modelltechnik” was founded in Berlin-Schöneberg.  Günther Bodemann was engaged as a designer and in 1956 the first glow ignition engine was presented.

A series of competitive successes followed and as demand increased, capacity was reached. The seat of the company was moved to Berlin, Oranienstraße 6. More premises made it possible to increase capacity and meet demand. Bragenitz left the company. The product name “WEBRA” remains in the company. Martin Eberth is now the sole owner from 1962.

In the 1960s, the political situation in West Berlin became increasingly uncertain. Entrepreneurs were worried about the continued existence of their businesses. Eberth was no exception. He sought contact with one of his competitors, Hirtenberger Patronen- und Zündhütchen AG. in Hirtenberg/Austria (HP).

In the Hirtenberg company, a production branch for model engines of the “diesel” generation (e.g. HP15) was established in the 1960s under the management of Paul Bugl. Since production was only running on a small scale, Johann Kaineder was hired in 1968 as a work technician and consequently as plant manager.

Under Kaineder, the first larger series products were developed, such as the successful glow ignition engines of the HP40 and HP60 “Silverline” generation, which were more powerful with Schnürle scavenging and better suited for the emerging RC flight. Peter Billes was responsible for the design. Paul Bugel left the Hirtenberg company at this time.

The first contacts of Martin Eberth with Johann Kaineder were established at the toy fair in Nuremberg in the early 70s.  It was agreed and already in 1972 the new WEBRA factory was founded in Enzesfeld (not far from Hirtenberg), about 35 km south of Vienna. Immediately after the foundation, the operation could be started.

Johann Kaineder, himself the managing director, set up series production, with the Webra 3.5 cc Glowstar, which was fully adopted from Berlin without modification, first coming off the production line before the company switched to in-house designs without exception.

Enzesfeld became the place for technical developments in the WEBRA group. One of these innovations was the very successful series of 2-stroke glow ignition engines with the inovative Schnürle scavenging of the types 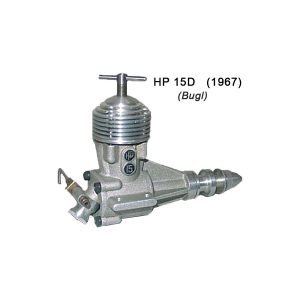 In the meantime, the Berlin plant had been abandoned, and from 1975 the company in Weidenberg near Bayreuth in Germany continued with limited production of the previous older Berliner designs.

Over the years, Enzesfeld became more and more the center of WEBRA engine production. There was no new design of a WEBRA engine anymore that did not come from Austria.

Hirtenberger Patronen- und Zündhütchen AG. ceased its engine production in 1986. One year earlier there was a change in the management at WEBRA Enzesfeld, Johann Kaineder retired for reasons of age and his son Gerhard Kaineder took over his duties.

The social conditions in the WEBRA Group also changed and Horst Eberth (son of Martin Eberth) took over the management in Weidenberg where the company increasingly specialized as a contract manufacturer and supplier for the automotive industry.

Enzesfeld was smart enough to immediately join the proliferating competition circuit after production of the Hirtenbergs ended and develop other engines needed by competition model pilots. The Austrian Hanno Prettner, seven-time world champion in motorized aerobatics en suite, and the Liechtensteiner Wolfgang Matt and others, of course, achieved their successes with engines of the Webra brand.

Model helicopters also benefited from the development work of WEBRA technicians. They created engines that were especially adapted to the operation of rotorcraft. Among other things, with higher engine power, better efficiency, more effective cooling and, above all, reduced noise development. WEBRA was also allowed to describe design technology, general running behavior and stability as “above average”.

This resulted in a close cooperation between helicopter manufacturers and proficient helicopter pilots. Webra-Enzesfeld has always taken its own steps towards developments and improvements. One never oriented oneself to the technology of the competitors, but without exception to the newest technical achievements and tried to improve these still single-handedly.

Gerhard Kaineder with his designer Peter Billes were the driving force in the further development in the sector of engine technology. WEBRA Enzesfeld had in any case become an independent Austrian company.

Since 1972, development and production took place in Enzesfeld. The unshakeable mainstay was still refinement and production of combustion engines, even if WEBRA occasionally entered peripheral areas such as electric drives, servos, receivers and radio remote controls. WEBRA also took on the four-stroke engine, but had to recognize that there was still a lot of development potential in the two-stroke.

To get the engine noise somewhat under control, the engine speeds were lowered (long-stroke engine) without sacrificing torque and the previously somewhat neglected sound damping was addressed. The result was surprising. WEBRA engines with matching mufflers were among the quietest units in model aviation. And with that, the two-stroke was back in a big way.

What has changed as a result is the interest in helicopters, which gave more and more competition to the fixed-wing models. WEBRA has also adapted to this. In Enzesfeld, the engine requirements of the latest helicopter models have been addressed and engine performance, engine cooling, materials, running behavior and design technology have been adapted to the special characteristics of this type of model aircraft.

Although WEBRA was still particularly fond of model flying, other areas also established themselves on an electronic basis. Especially in the sector of industrial electronics, the company developed into a much respected specialist. The experience gained in the field of radio remote control is naturally also reflected in the field of model flying. It is not surprising that, in addition to the mainstay of motor production, particularly powerful and safe transmitters and receivers in various radio frequencies rolled off the production line. In other words, the company did not buy knowledge from others, but developed it itself.

This new market segment has become another mainstay for WEBRA, which easily compensated for the sometimes fluctuating demand for leisure products (model flying). Incidentally, the fact that the entire production was 90 percent export-oriented and found buyers in Germany, the rest of Europe, the USA and Asia is reassuring. Even the Japanese market was not uninteresting. “Made in Austria” had long had a certain status there.

In the 90s, more and more model building products from China came onto the world market. Originally of low quality at sublime prices.  At the high production costs prevailing in Europe against the production costs given in China, many European model manufacturers could no longer be competitive. One adjusted to market segments which demanded innovation, performance and above all quality. Here WEBRA could also further develop and market its products.

Due to the world financial crisis in 2008, the WEBRA Enzesfeld plant was also affected in 2010. The company had to file for insolvency, a continuation of the company was no longer considered by the shareholders, so the WEBRA model engine era of more than 70 years came to an end.

The design principle of the “Diesel” model engine consisted of an aluminum injection-molded crankcase which accommodated the cylinder liner at the upper end of which sat a counter piston. In the mounted cooling head, a toggle was inserted via a thread which served to adjust the compression. The fuel used was a mixture of ether, kerosene and castor oil.

Thanks to Gerhard Kaineder