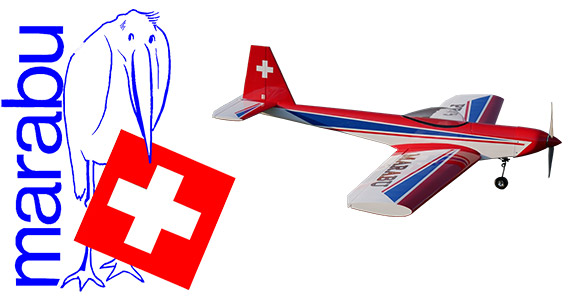 BRUNO GIEZENDANNER two-time World Champion shares with us his FAI Pattern plane. The MK III version flown by both himself and his brother Emil at ’71 World Champs in Doylestown incorporates all of the mods and represents best in FAI!

Top flyers are always accused of holding back secrets about their designs. Modelers are very unhappy when their new model doesn’t fly the way they thought it would — they think there is some kind of trick or information that the expert didn’t include on the plans for his design. Normally, the problem is with building the model—it simply wasn’t built according to the specifications on the drawing. 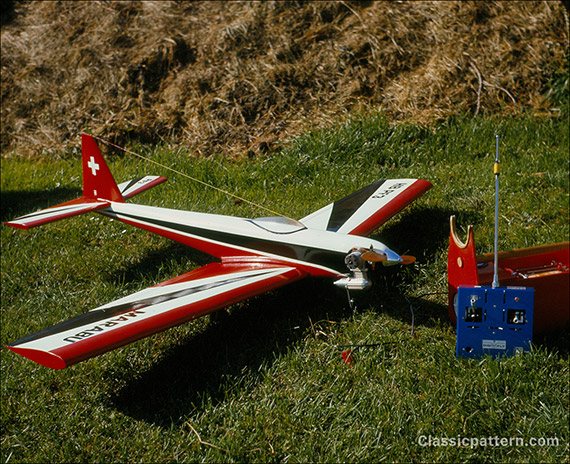 We know that model information is very freely given out by the experts. At the recent World Championships we noted that the so-called were being freely given out to anyone who asked. Problems of expert-to-notice communication do exist because most modelers do not find the time to write about their experiences or make drawings. The drawing of our Marabu MK III is our attempt to pass on to those interested the result of many thou-sands of hours of development that produced what we feel is the ultimate competition Stunt model. 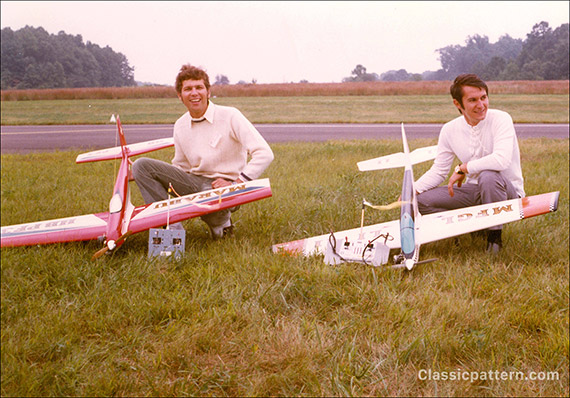 Interest in our 1971 version of the Marabu that we flew at the 1971 World Championships was so great that we decided to update our drawing for the Marabu G. The latest version is now the Marabu MK III, shown with this article. 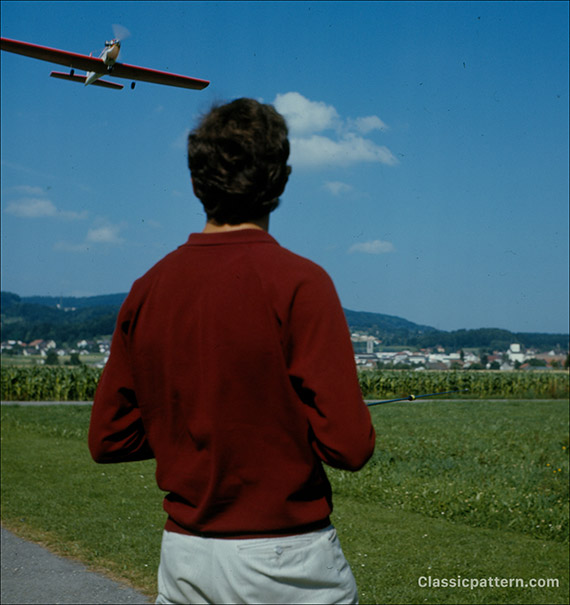 The design considerations that follow are only in reference to the Marabu type of aircraft. Perhaps our comments can apply to other designs as well. The modifications are minor in nature when taken individually, but when combined, result in a major improvement over last year’s Marabu G.

We have observed many Marabu`s flying that were built from our plans. Major differences have been observed from model to model even though each was built from the same plans. The builders made minor changes, some on purpose, others in error. We have been completely amazed how some minor change drastically alters the model’s flying. The point to be made here is don’t change the design—build it ac-cording to the plan. We have flown the Marabu MK III design for hundreds of hours—believe us, everything is done for a purpose. There are no unnecessary frills offered here; we feel that no significant performance increase with the model can be obtained with today’s rules and equipment. 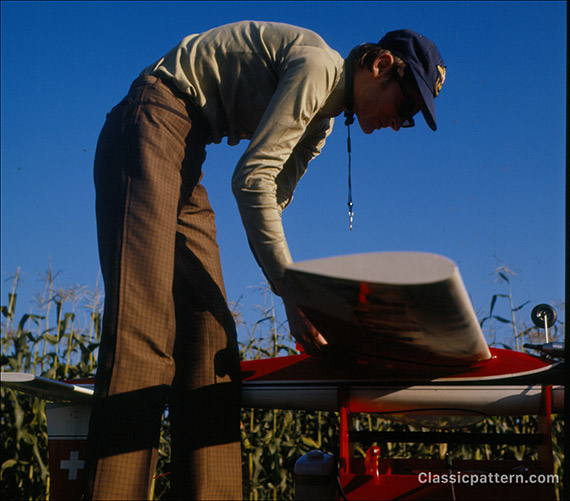 Marabu can be built with a fixed landing gear. Performance is satisfactory; however, the acrobatic ability is certainly held back with the fixed gear. Our experience with retractable landing gears has shown that the rolling maneuvers are very accurate about the longitudinal axis—fewer pilot corrections are required, therefore the model is easier to fly, and is also easier to fly under strong wind conditions. The reduction of landing gear drag is very noticeable under these conditions. 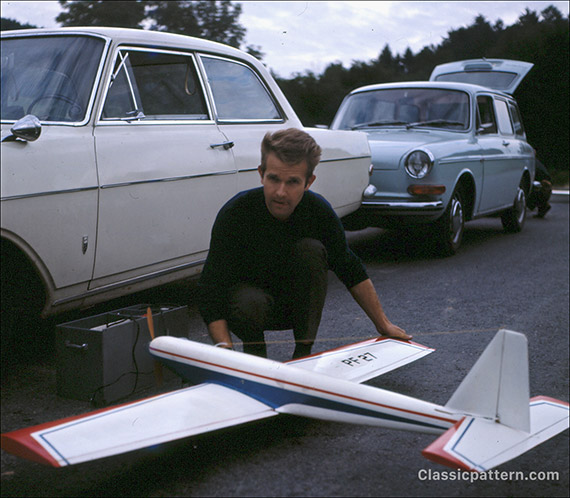 Today’s flying standards are very precise. The model is usually flown parallel to the takeoff and runway direction, regardless of wind direction. Proof of Marabu’s crosswind ability was shown by its victory at the 1969 Internats in crosswind conditions. We found that the model’s crosswind performance could be further improved by shortening the nose; the shorter nose increased stability about the lateral and vertical axis. Engine torque now became less of a consideration and rudder response was now much more positive. “Hands-off” stability improved and noticeable reduction of transmitter trim corrections were observed. The neutral position of the elevators was less critical. Net result was the model “grooved” much better. 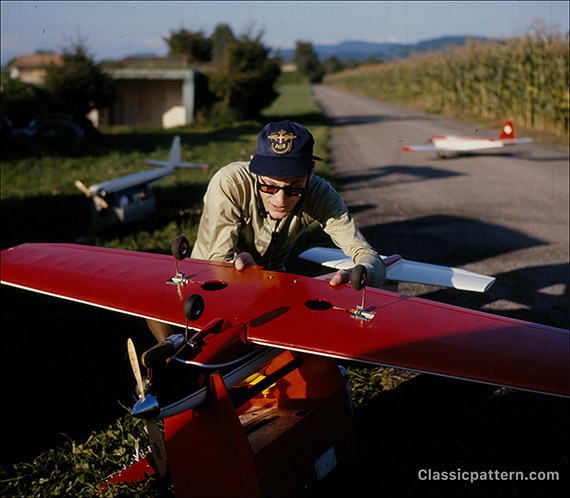 Because of reduced size of R/C equipment we were able to thin down the fuselage somewhat, thus cutting down drag. The airfoil of the vertical fin was changed to a flat airfoil. 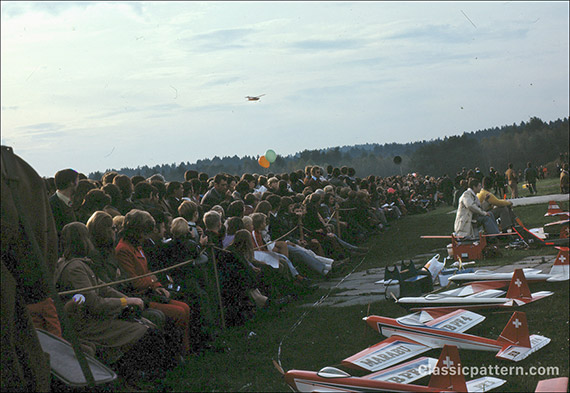 The wing was not changed — the Marabu wing still features a semi-symmetrical airfoil at the root, going progressively to a full symmetrical section at the tip. There is also a slight amount of wash-out in the tips. Purpose of the wash-out is to improve low air-speed performance and stability. We generally fly off rough grass fields, and landings and takeoffs are normally done at the lowest possible speed so as to keep the stresses on the retractable landing gear and airframe to a minimum. Marabu at low airspeed will keep its wing level until the very last moment before the model stalls. 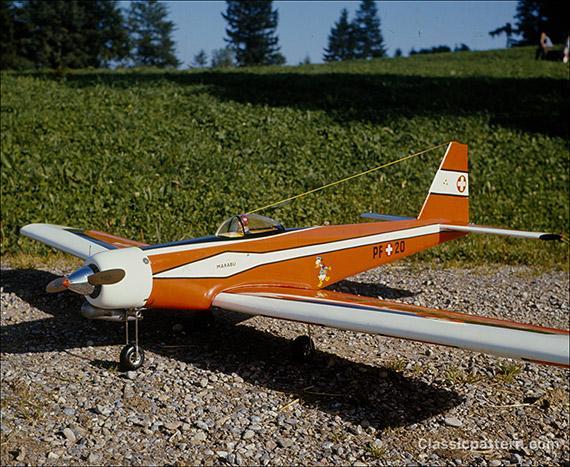 Construction of the Marabu is no difficult. Standard construction materials are used, with the exception of the fuselage sides. We used Graupner laminated 1/ 8 balsa plywood, a material not readily available in the U.S.A. Medium soft 1/4 balsa sheet can be used as a substitute. The width of the bulk-heads and other minor modifications will have to be made to obtain the correct outside fuselage width.

Fuselage: First the triangular gussets are glued on the sides. Note the slight curve necessary on the forward half of the top gusset. The motor mount is made up as a separate unit. Two pieces of filler blocks are glued to the left side of the maple mount. The inside filler block has a cutaway for the engine crankcase. The other piece does not, and is slightly smaller, as shown by the dotted lines. Drill the engine mount holes; #6 sheet metal screws will be used to bolt the engine in place. Mounting holes for the retractable nose gear should be made at this time (Giezendanner gear used in the original). The bulkheads can now be attached to the sides. The top and bottom are now attached. Front spinner ring is glued in place. Cutout is made to install engine. Engine is in-stalled so that the spinner can be in-stalled to allow shaping of nose to con-tour of spinner. Carve and sand fuselage to correct cross section as shown an the plans. Failure to properly carve to the correct shape will produce heavy fuselage and a good chance of a tail-heavy condition.

Stab and Fin: Keep the weight of the tail assembly to a minimum. The leading and trailing edges of the stabilizer are oversize to allow them to become part of the jig. The side view of the center section rib explains the jig method. Stabilizer and f in are not attached to the fuselage until the wing is fitted to the fuselage.
Wing: The wing is fabricated an a flat building board with the dihedral built directly onto the board. The wing can be built in halves and joined later if so desired. Wing drawing can be glued directly to the building board. 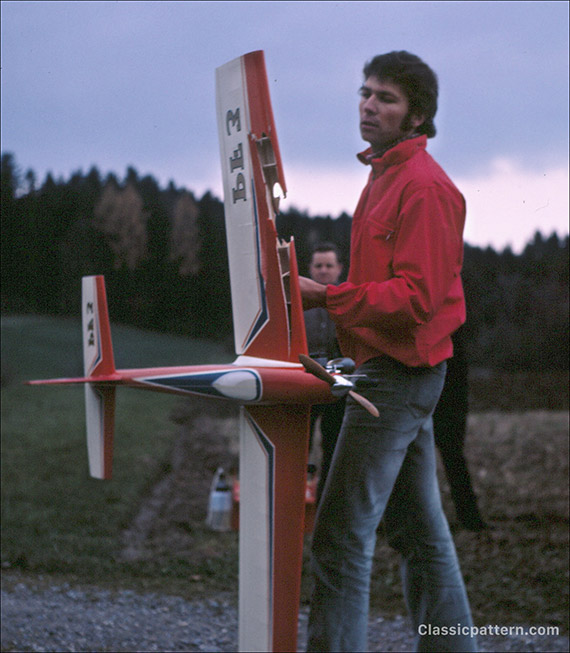 Glue the bottom spars to the shear web notched spars. The halves are joined together. Six sets of headless nails ( #3 half nails) can be driven into the appropriate places to hold the spar/ shear web assembly in place. Removal of the heads allows the practically completed wing to be removed from the building board. Attach the ribs, installing them so that the mounting flange at the trailing edge is firmly pinned in place onto the building board. Leading edge, trailing edge and top spar are installed. Glue top trailing edge sheeting in place. Install wing; attach peg braves and center section ribs. Remove wing from jig and sand leading and trailing edges to fit contour of ribs.
Preform 3/ 22 x 4 leading edge sheeting by soaking middle of sheeting (highly bent section) with ammonia or hot water, and bending around a 1/ 2″ dia. rod. When sheeting has been permanently formed, attach to wing leading edge. Use a slow drying glue or, better yet, Hobbypoxy #2. Use masking tape over each rib to pull sheeting into position. Note that the sheeting will not reach to the spar. Additional sheeting will later be installed. Re-install the wing into the jig and allow leading edge sheeting glue to dry or cure. When ready, remove masking tape and install remaining top sheeting and cap strips. 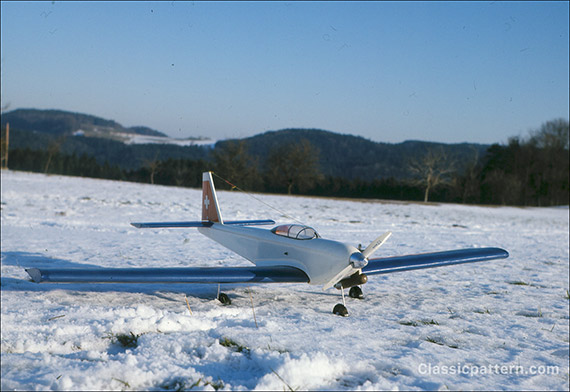 The landing gear reinforcing brackets are installed when the wing is ready to be removed from the jig. The remaining portions of the wing are finished. The retractable landing gear units should be installed prior to attaching the bot-tom sheeting. The trailing edge jig mounting flanges are removed to allow attachment of the bottom T.E. sheeting. Finish the wing as per the drawing. 1/4-20 nylon bolts can be used in-stead of camlocks. Plywood bracing in the wing should still be used if bolts are used.

Fit wing to fuselage, making certain that the wing is properly aligned. Install wing fillets and fit to wing for as perfect a fit as possible. Trim final contour of fillet after wing is fitted properly.

Cut out for stabilizer. Use stabilizer tip center line as reference. The center line should be in line with the top rear of the fuselage sides. Install fin as required. 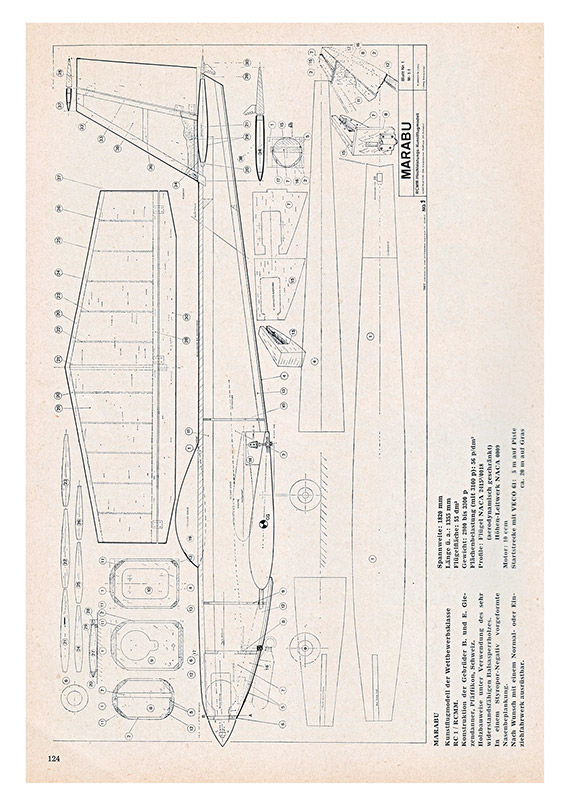 The model is then fine-sanded. A covering material such as Midwest Microlon is recommended. Installation of the R/C equipment should be done last. Locate the units so as to provide the correct center of gravity location. Wood pushrods are recommended. Wrap electrical tape around the gas tank so that vibration will not cause the bulkhead through which the tank goes to wear away the plastic. 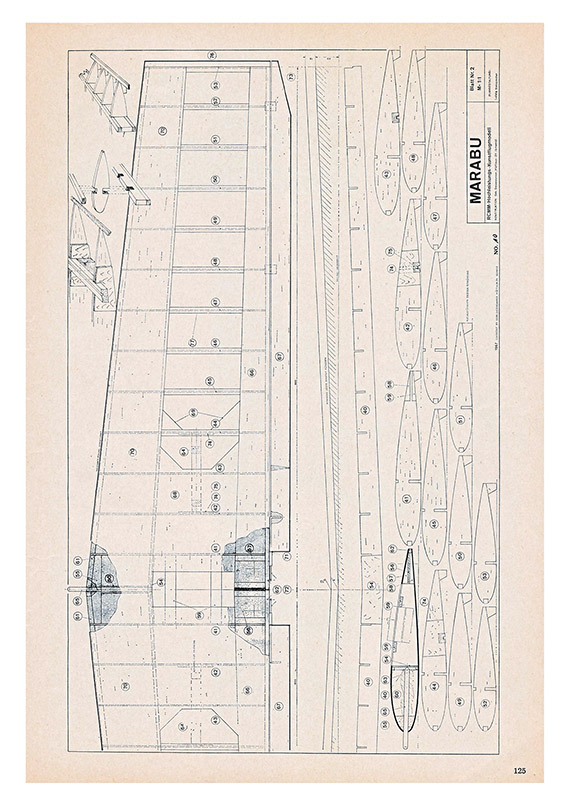 When Marabu MK III is correctly adjusted and properly trimmed, the flyer will have a very easy-to-fly competition model that will provide many hours of enjoyment—and perhaps a few competition victories.

(Translation by Monika and Jerry Nelson.)