Review, Tübingen, 3th July, 982: The competition in Las Vegas has inspired the model pilots to a new class: For quite some time now, but now this class has been coming into its own, with a full field of participants, with participants who have rank and file, and with a sophisticated flight program. 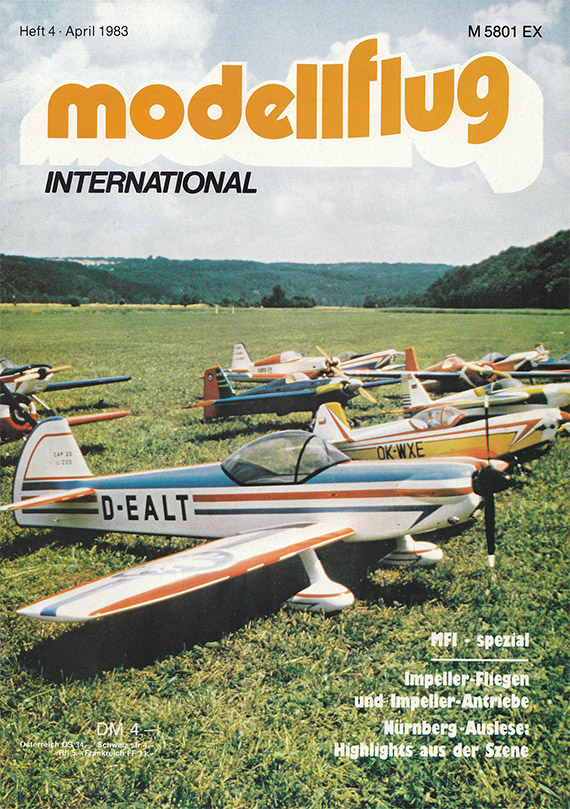 5 competitions would take place in this class in Germany this year. The next one on 28th and 29th August in Erding, then on 4th and 5th September in Lemgo and then the weekend after in Freckenhorst. It’s a quite exhausting and time-consuming workload if the participants want to take part in all these competitions. 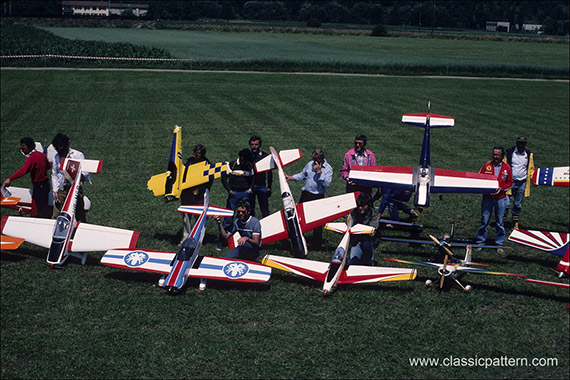 The model for F3AX should be a replica of a manned aircraft and as recognizable as possible. The large aerobatic planes serve as models. The choice is not very big.

For monoplanes the wingspan must be at least 200 cm, for biplanes at least 180 cm. A maximum span of 250 cm is permitted. The total weight of the model may not exceed 10 kg. This more or less defines the power requirement options: Two 10cc engines coupled by gearbox, a 15cc engine, a Tartan or EVRA or Quadra engine.

Only if the models have sufficient power then the aerobatics program can be flown with them. And the competition showed that a whole range of airframes, despite having large and heavy engines simply did not have enough steam. In addition there were a few dropouts, because the engines were still too new and the experience with them was still too limited. 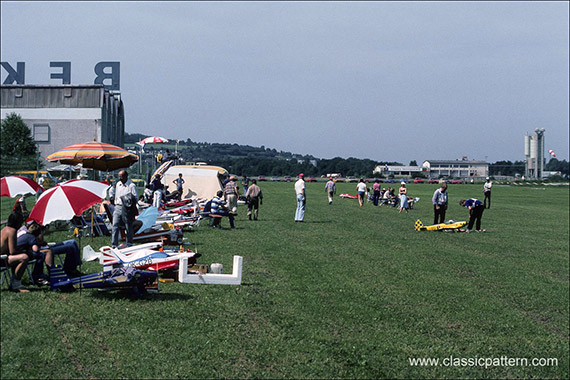 Among the models you could see were several CAP 20 (with Quadra, Webra Bully and Tartan Twin), a Skybolt and a Super Fli with Boxer engine, a Laser with Quadra, a Zlin and a Cranfield with 15cc Webra and a Yak with Tartan Boxer, just to name a few. The competition went quickly and without any particular incidents, despite the sometimes stormy wind, from which, especially the lighter models, suffered. A well-attended show flying concluded the competition.

At 9.30 a.m. on Saturday, July 3 {year), the first of a total of 14 participants in Class A and 11 participants in Class B started. In order to have enough time for the next day’s display flying, two rounds A and all three rounds B were flown on the first day of the competition, although brief thunderstorms caused a number of interruptions.

Already from the first round on, the multiple German champion RC-I/A and Las Vegas participant Günter Hoppe did justice to his role as favourite and could not be displaced from first place until the 3rd round. He used his well known CAP 21 with two 10ccm engines and a gear box. Although this drive worked perfectly during the competition, he – like many other competitors – did not consider this power plant ideal because it was difficult to set both engines to synchronous running at all speed ranges. Inaccuracies in the lower speed range often led to engine stoppages.

In addition, there is no possibility of remote-controlled nozzle needle adjustment, as it is not possible to tell from the ground which engine needs to be readjusted. The flights of Günter Hoppe were all equally good, and one recognized his experience in the field of model aerobatics.

Due to the enormous power reserve in all figures the CAP 20 by Dietrich Altenkirch attracted attention. The Webra Bully 35 with electronic ignition and tuned pipe built into the fuselage turned 8000 rpm with a 20/10 propellor. Thus the 8 kg model with 2.43 m wingspan pulled excellently through all figures. – Günther Metterhausen used another large model with a wingspan of 2.40 m. His YAK 50 was equipped with a pneumatic bipod retractable landing gear from AMT, which retracted the wheels to the rear.

Due to the boxer engine principle, the built-in Tartan 44 with two tuned pipes ran very smoothly. Since the engine had not yet been fully run in, it was not yet possible to say anything precise about the final performance that could be achieved.

Dieter Stukenbrock, another contender for the front places, unfortunately lost his CAP 20 due to aileron flutter. One aileron was torn out of the wing and the linkage was removed from the other.

A crash with total loss could not be prevented. The machine was powered by a four-stroke boxer engine from Kavan with 50 ccm displacement.

The engine was characterised by particularly quiet running, power and low noise generation. From the second run on he used his YAK 50 with the Bully 45 engine again and reached 4th place in the overall ranking. He was followed by Erwin Müller with a Cranfield A-1, whose wingspan was increased to 2.08 m.

The engine was characterised by particularly quiet running, power and low noise generation. From the second run on he used his YAK 50 with the Bully 45 engine again and reached 4th place in the overall ranking. He was followed by Erwin Müller with a Cranfield A-1, whose wingspan was increased to 2.08 m. 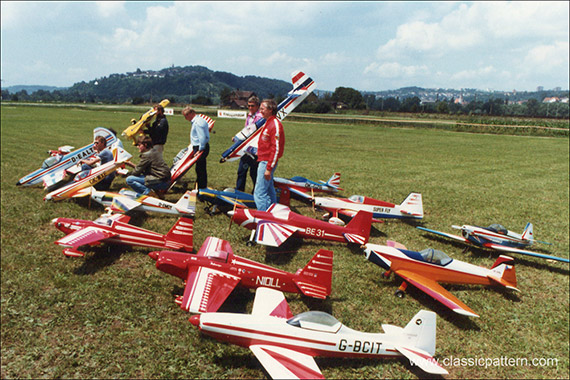 The model had landing flaps, which could be switched as counter flaps to the elevator. The combination of flaps and a larger wing area enabled a slower, more realistic flight than with the original wing. The 15cc OS engine with 14/6 propeller and OPS tuned pipe gave the 5 kg model sufficient power. 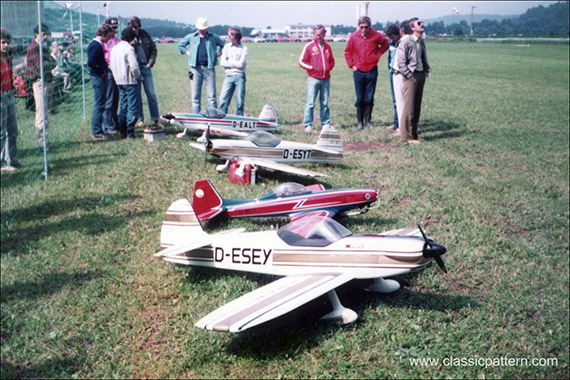 Rolf Schuler used the only biplane in the competition. His Skybolt from Bauer-Chocal was equipped with a Tartan 44 and had both tuned pipes integrated in the fuselage. The power was still sufficient to fly the A program cleanly with the 8 kg model.

It became clear that the high air resistance of biplanes is not favourable, because the acceleration was lower and the higher speed, which is advantageous for some figures, was not reached. 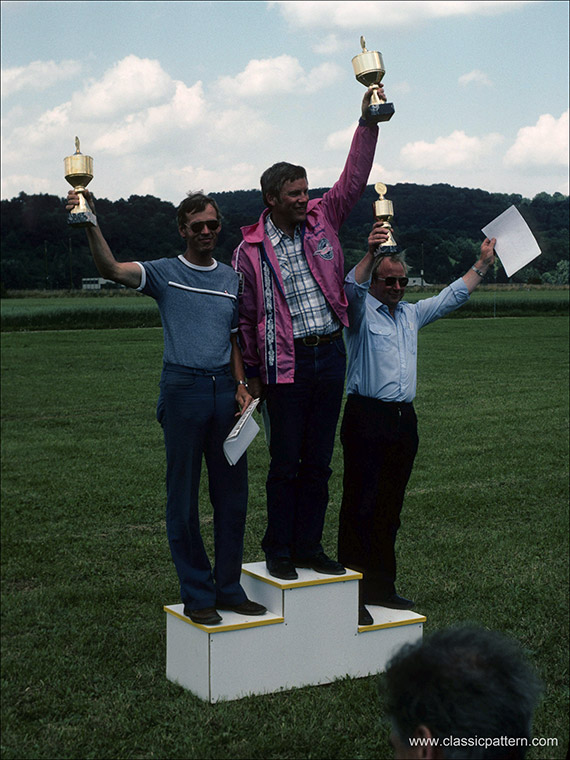 Bernd Enenkl flew, as last year, a Stevens Acro, type ‘Super Star’ with Quadra engine and built-in tuned pipe. The model had a wingspan of 2.20 m and weighed 7.5 kg. It turned out that for this engine no larger models are possible, if you still want to have enough power for the A-programme. 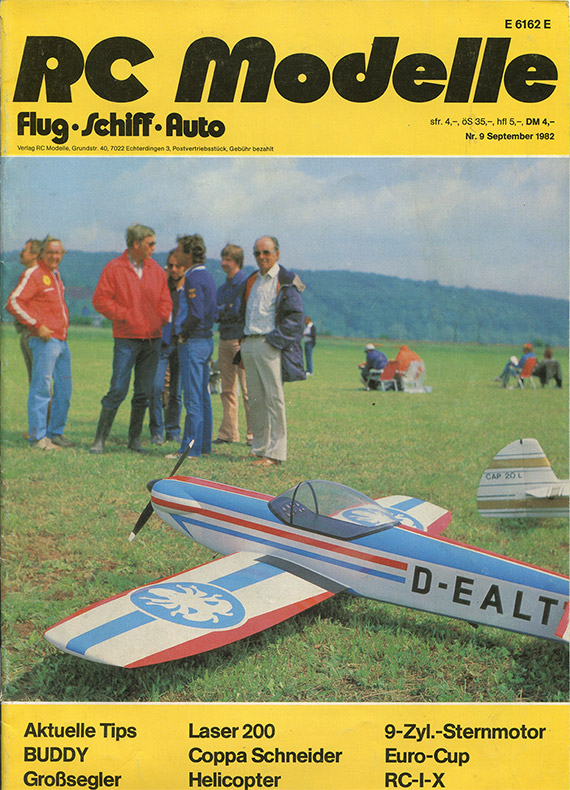 Gerald Wilfing, one of the best pilots of the B-program of the 81season, started in Tübingen and achieved 8th place.

He again used his LASER 200 from Topp with Quadra engine. – By the way, in the A program some models of the type Cranfield A-1, Zlin 226 Akrobat, Zlin 50 and LASER 200 were still flown.

In the B program the same models as in A were used for the most part. Bernd and Thorsten Speyer came to Tübingen with two CAP 20, which were still equipped with a Quadra engine, but otherwise had the same dimensions as the Altenkirch machine. Due to the failure of D. Stukenbrock’s CAP 20, Wilfried Feix was the only participant who used a model with a four-stroke engine. 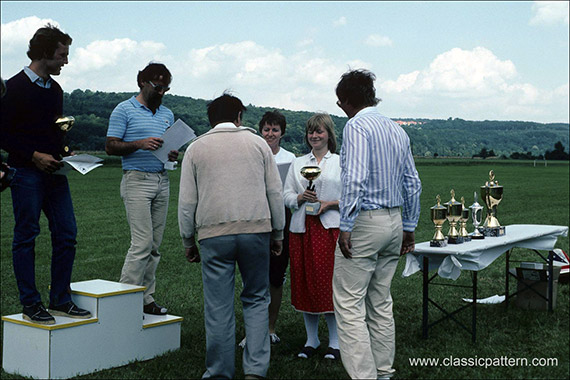 He installed the OS-Gemini in a LASER 200 from Bauer-Chocal. Since the plane weighed 5.5 kg, the power was just enough for the B programme with appropriately selected figures. The Acrostar of the French participant Bernard Dollè was also a little underpowered. The airframe weighed 8.3 kg and had a wingspan of 2.35 m, for which the power of the Quadra without a tuned pipe was just sufficient.

As in the last RC-I/X competitions, it became clear at this year’s Neckartal Cup in Tübingen that geared motors were not able to prevail. Many pilots consider them to be too susceptible to faults for the competition.

Because of the danger of ignition spark interference, many model pilots did not install motors with electronic ignition. The four-stroke boxer engine FK 50 from Kavan was generally praised, but due to its high purchase price it is only available to a limited circle of model pilots. The advantages of the Tartan 44 have already been mentioned.

In order to achieve maximum power, two tuned pipes are required, which makes the installation in the fuselage very difficult in some models. – One question that could not be answered was: “Does the Webra-Bully 35 used by Altenkirch in the glow-ignition version achieve the same performance as with electronic ignition? – In order to solve the problem of the best power plant easily, many participants flew models with a wingspan of just over two metres and weighing about 5 kg.

These machines allowed the installation of the 15ccm engines with tuned pipe, known for reliable running. Pilots of these ‘small’ models had the disadvantage that the flight picture was not so realistic compared to the large machines. 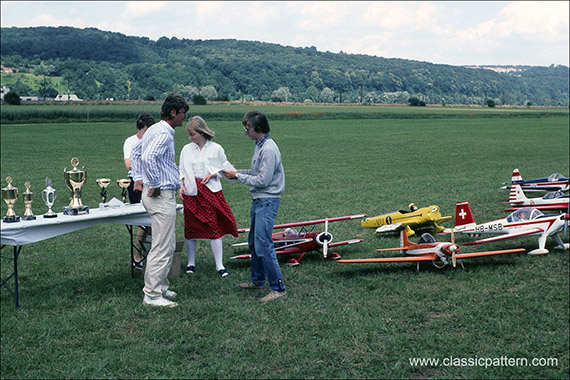 Large models with a wingspan greater than 2.40 m were not used, because despite the divisible wing and removable tailplane, stowing them in a car already required custom work. – Among the remote control systems were all the well-known brands which were equipped with twin servos or enormously powerful servos for the main functions in large models. 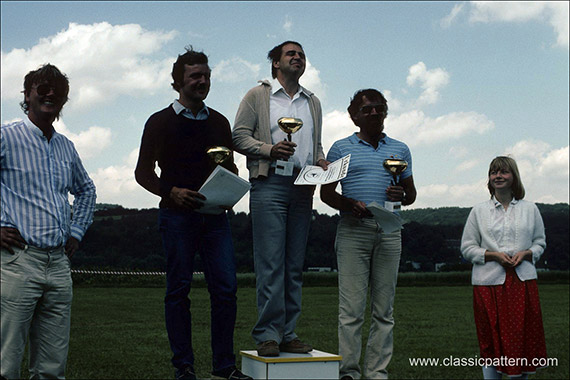 The competition went quickly and without any particular incidents, despite the sometimes stormy wind, from which, especially the lighter models, suffered. A well-attended show flying concluded the competition.

Special thanks to Martyn Kinder for perfect english